A City lawyer at international firm White & Case is reportedly the only lawyer to join Prime Minister Theresa May on her trade mission to Africa - a trip in which the benefits of English law and legal services is being highlighted. 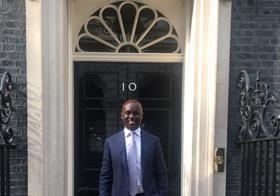 Joshua Siaw is a partner in the firm’s global banking practice and also director of the Africa practice. According to the firm, Siaw is the only lawyer making the trip with the PM. May is currently in South Africa and will also visit Nigeria and Kenya in a bid to deepen economic and trade ties between the UK and African economies and highlight investment opportunities ahead of the UK leaving the EU.

Speaking to the Gazette from South Africa, Siaw said the countries, all based on English common law, were a natural fit for the visit.

He said at a time of increased investment in Africa, particularly sub-Saharan, now was an opportunity to promote English legal services - both from an advice point of view and to promote London as a centre for dispute resolution. ’We are increasingly seeing companies coming to England for dispute resolution. The reaction on the ground has been positive and companies are receptive to England as a jurisdiction of choice,’ Siaw said.

He added: ‘Our goal is to play a significant role in promoting strong political, trade, finance and development relationships between Africa and the UK and other international markets. A visit like this plays a fundamental role in continuing to strengthen alliances between the UK and the many countries, peoples and cultures of the diverse African continent.’

White & Case has been active in Africa for more than 40 years and was the first international law firm to open an office in South Africa. Melissa Butler, leader of the firm’s Africa interest group, said: ‘We’re very proud of our track record in Africa and delighted to have the opportunity to support Prime Minister Theresa May and the UK government on this important trade mission.’

Businesses in the technology, infrastructure and financial and professional services sectors are also accompanying the PM.

The Gazette has asked for a full list of delegates.