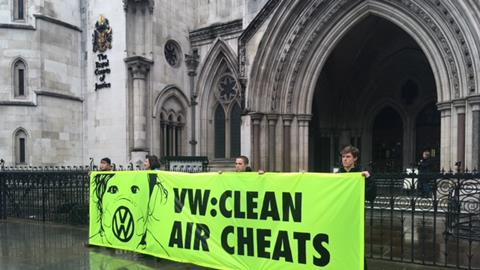 Mammoth VW case gets off to slow start

The complexities of a vast group action claim on behalf of more than 50,000 UK car buyers against Volkswagen (VW) were laid bare yesterday as procedural requests by lawyers meant just a few minutes of opening arguments were heard. The three-day group litigation order (GLO) hearing began yesterday at the High Court.

The order is intended to determine how the three law firms involved in the case, Slater and Gordon, Leigh Day and Your Lawyers, can join forces for a group action and which firm will act as lead solicitors. The GLO may also determine a deadline by which other aggrieved VW customers can join the claim.

However, the Gazette understands that only around seven minutes of public proceedings occurred during the day.

VW is also understood to be demanding costs incurred so far after three previous hearings failed to progress.

The case is expected to resume today with an order expected today or tomorrow.

The claim against VW, thought to be one of the largest group action cases in England and Wales, arose out of revelations that the motor giant fitted diesel cars with software to manipulate the results of emissions tests.

In a statement to the Gazette, VW described the action as ‘premature and unfounded’ and said it will robustly defend the claims.

A spokesperson told the Gazette: ‘It has not been established that the relevant software is an illegal defeat device. We have made it clear that we do not anticipate that our UK customers have suffered any loss or financial detriment. We have implemented the technical measures in over 840,000 vehicles in the UK and in over 6.4 million vehicles across Europe, and the overwhelming majority of customers with these vehicles are satisfied’.