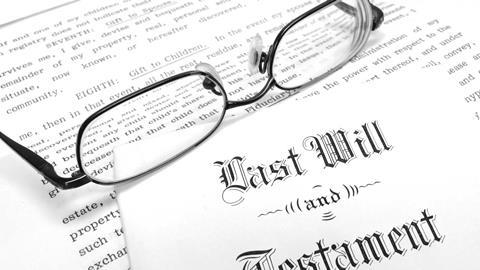 Solicitors have been backed as the best option to ensure that wishes written into wills are met.

In a survey by Will Aid, a partnership between the legal profession and top charities, 62% of respondents said they prefer to use a solicitor to manage their will.

Peter de Vena Franks, campaign director, said Will Aid was hoping to continue to work with solicitors to promote the profession ahead of a ‘do it yourself’ option.

‘Drawing up a will is a vital financial planning step but the lure of the cheaper alternatives to solicitors can mean the document is not properly written nor legally binding,’ he said.

Will Aid works with law firms across the country that pledge a portion of their time to write basic wills and waive their usual fees in exchange for a voluntary donation to charity. They suggest minimum donations are £95 for a single will and £150 for a pair of mirror wills.

The donations go to the nine charities involved.

Franks added: ‘While an off-the-shelf will might seem attractive to those who are watching the pennies, it could be money wasted rather than saved.’

According to Will Aid’s research, 62% of people who made a will last year used a solicitor and 12% a will-writer. A further 9% made a homemade will while others used DIY kits or banks or high street services.

The research also revealed that the public were generally unaware of the rules and regulations governing will-writers and that will-writers can practise without proper training, regulation or insurance.