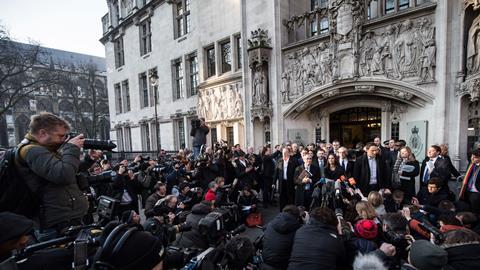 Politics and the law were kept well apart in the Supreme Court’s adroit and erudite judgment in Miller.

It is a well-established principle of UK constitutional law that parliament - not the government - is supreme over our domestic law: Case of Proclamations (1610), The Zamora case (1916), and the Tin Council case (1990).

The Royal Prerogative (prerogative powers) encompasses the residue of powers that remain vested in the Crown, but are now exercisable by ministers of the UK government, provided the exercise is consistent with parliamentary legislation.

The exercise of prerogative powers cannot change domestic law. That is a matter for parliament. Treaties are not part of domestic law. So ministers may exercise prerogative powers to make or withdraw from international treaties, provided that such exercise does not effect alter domestic law or confer rights upon individuals or deprive individuals of rights that they enjoy in domestic law without the intervention of parliament: ‘Quite simply, a treaty is not part of English law unless and until it has been incorporated into the law by legislation.’ (Lord Oliver in the Tin Council case)

Two issues were before the Supreme Court in Miller.

The principal issue was whether notice to withdraw from the European Union under article 50 of the Treaty on European Union could lawfully be given by government ministers without prior authorisation of an Act of Parliament.

The second issue was whether the terms on which powers have been statutorily devolved require consultation with or the agreement of the devolved legislatures of Northern Ireland, Wales and/or Scotland respectively, before a notice is served, or otherwise operate to restrict the government’s power to do so.

By a majority of eight to three, the Supreme Court in dismissing the government’s appeal on the principal issue held that an Act of Parliament is required to authorise ministers to give notice of the decision of the UK to withdraw from the European Union.

On the devolution issues, the court unanimously held that: (1) the relevant provisions of the Northern Ireland Act and (2) the convention that the UK parliament would not normally exercise its right to legislate with regard to devolved matters without agreement of the devolved legislature, did not legally require the consent of, or consultation with, the devolved legislatures before an article 50 notice could be served by the UK government.

The decision of the majority on the principal issue is consistent with long-established UK law. The prerogative powers accumulated by the UK government from British monarchs over several centuries may not extend to acts that result in a change to domestic UK law.

So, whilst the UK government may enter or leave foreign treaties as a matter of its discretion, it does not have that discretion (or prerogative power) where such acts would result in a change in domestic UK law. That is a matter for parliament.

Where did the majority differ from the dissenting minority?

The majority eight members of the court and the dissenting minority disagreed not over the fundamental and well-established principles governing supremacy of parliament or the limited scope for the exercise of the royal prerogative by ministers.

But rather, they disagreed over the interpretation of the relevant provisions of the European Communities Act 1972 and (in the case of a single member of the court) over the effect of article 50 of the Treaty on European Union.

In the view of the majority, section 2 of the 1972 act constitutes EU law as an independent and overriding source of domestic law, unless or until parliament decides otherwise.

The court rejected the government’s arguments that the 1972 act (1) did not exclude the power for ministers to withdraw from the EU treaties, and (2) actually catered for the exercise of such power, as it gave effect to EU law only so long as the power of withdrawal is not exercised.

Consequently, withdrawal would amount to a fundamental change to the UK’s constitutional arrangements, by cutting off the source of EU law. That would be the inevitable effect of an article 50 notice being served.

That justified the conclusion that prerogative powers cannot be invoked by the government to withdraw from the EU treaties. Nor would prerogative powers extend to enable the government to make changes in domestic rights acquired through EU law, such as rights of citizens to benefit of employment protection, equal treatment, protection of EU competition law; and the rights of non-residents to the benefit of the four freedoms (free movement of people, goods and capital, and the freedom to provide services).

The absence of clear words in the 1972 act authorising ministers to withdraw from EU Treaties meant that the court rejected the argument that the 1972 act implicitly permits the government to decide that the EU rights introduced by the 1972 act should only prevail from time to time and for as long as the government did not decide otherwise. For as Lord Hoffmann explained in R v Secretary of State for the Home Department, Ex p Simms [2000] 2 AC 115, 131: ‘The principle of legality means that parliament must squarely confront what it is doing and accept the political cost, [and so] [f]undamental rights cannot be overridden by general … words [in a statute] because there is too great a risk that the full implications of their unqualified meaning may have passed unnoticed in the democratic process.’

Moreover, a close reading of the provisions of the 1972 act, far from indicating that ministers had the power to withdraw from the EU treaties, supported the contrary view in the judgment of the majority.

Nor did the European Union Referendum Act 2015 Act, which provided for a referendum, mean that the referendum was a matter for UK government ministers alone, and that ministers should not be constrained by legal limitations that would have applied in the absence of the referendum.

The effect of any referendum depends on the terms of the statute authorising it. The 2015 act simply provided for a referendum to be held but without specifying the consequences. The referendum subsequently held in 2016 did not change the law in a way that would allow ministers to effect the UK’s departure from the EU without legislation. However, as the majority of the court observed: ‘But that in no way means that it is devoid of effect. It means that, unless and until acted on by parliament, its force is political rather than legal. It has already shown itself to be of great political significance.’

The three dissenting judges (Lords Reid, Carnwath and Hughes) took the view that whilst they accepted the principle of parliamentary supremacy over UK domestic law that principle did not require that parliament must enact an Act of Parliament before the UK could leave the EU.

The effect which parliament had given to EU law under the 1972 act, was inherently conditional (in the view of the minority) on the application of the EU treaties to the UK, and therefore on the UK’s membership of the EU.

Nor in their view, did the 1972 act impose any requirement, or manifest any intention, in respect of the UK’s membership of the EU. Accordingly, so reasoned the minority, the 1972 act did not affect the Crown’s exercise of prerogative powers in respect of UK membership.

One dissenting judge (Lord Carnwath) took the further view that service of notice under article 50(2) did not itself change any laws or affect any rights. ‘It is merely the start of an essentially political process of negotiation and decision-making within the framework of that article.’

The Supreme Court sought to steer clear from matters of politics, and concentrated instead on the pure questions of law before it.

On the bedrock of constitutional law, the court then closely considered the provisions of the relevant statutes and EU Treaty before it: the European Communities Act 1972, the European Union Referendum Act 2015 and article 50 of the Treaty on European Union.

The judgment of the majority is consistent with well-established constitutional principles, and demonstrates a sound textual analysis of the relevant legislation.

Politics and the law were commendably kept well apart in an erudite judgment. The legal position is now clear. The politics to follow is likely to prove much less so.