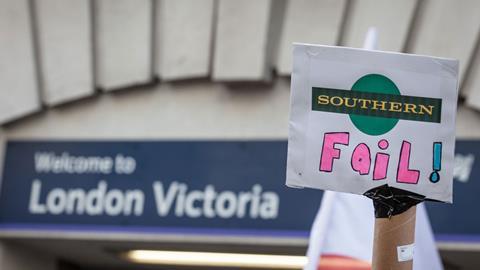 Passengers of the crisis-hit franchise seek action over the handling of ongoing issues with Southern service.

The case against the DfT

This application for judicial review, brought by the Association of British Commuters (ABC), centres around two main grounds. One of those grounds, if successful, is likely to be of ongoing significance in relation to how government manages contracts it has procured. The other of those grounds, if successful, is of real potential significance in relation to disability rights.

This is an important ground of challenge because if the claimant is held to be right, it would mean that in future the government would need to consider whether its ongoing management of contracts it has procured in the rail industry is susceptible to judicial review on similar grounds.

The second main ground (which is actually split into three separate, but related, grounds), concerns the allegation that the secretary of state for transport, Chris Grayling, has failed to comply with his duties under the Equality Act 2010 and his public sector equality duty (PSED), causing indirect discrimination to passengers with disabilities. The secretary of state has apparently denied that he is subject to any duty under the Equality Act 2010. ABC alleges that the DfT’s failure to hold Govia Thameslink Railway to its franchise obligations (which must apply equally to able-bodied and disabled passengers) is unlawful, because it has led to extreme overcrowding, which is particularly problematic for disabled passengers, and which has resulted in indirect discrimination against disabled passengers.

If ABC wins, this ground may set an important precedent for campaigners for the rights of disabled people.

One of the issues which the court may have to consider is whether changes to disabled access to the network operated by Govia Thameslink Railway affect accessibility for disabled passengers. One such change is that where previously 33 stations provided guaranteed access on a ‘turn up and go’ basis, this will be changed to require 24-hour advance booking at all stations. This is an issue which has been raised by ABC previously so the court might be presented with arguments as to whether this change to service provision, which removes the possibility of spontaneous travel from disabled passengers, falls within the scope of the proposed grounds of judicial review.

As is usual in judicial review proceedings, the next steps are for the DfT to respond to the application for permission to proceed and a decision will be taken by the court on this point. Although the DfT appears to have resisted these grounds in its response to ABC’s letter before action, it seems likely that permission to proceed will be given as both of the main points made seem to be arguable.

The relief sought is declaratory relief; that is a finding by the court that the secretary of state has acted (or continues to act) unlawfully. Should such a declaration be given, it has the potential to significantly change the dynamic of the current tensions around the provision by Govia Thameslink Railway.