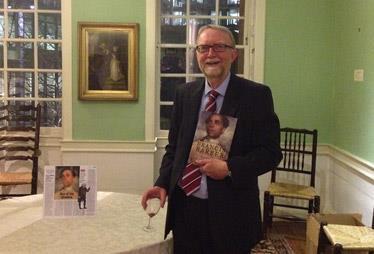 Lawyer up for literary prize

A solicitor is among the nominees for a prestigious literary prize.

Michael Bundock, a professional support lawyer at Stephenson Harwood, has been shortlisted for the Best First Biography Prize 2015 for his book The Fortunes of Francis Barber. The prize, which is worth £3,500 to the winner, is sponsored by the literary quarterly Slightly Foxed, and will be presented at the Biographers’ Club Dinner on 4 November.

Bundock’s book tells the story of the extraordinary relationship between a former slave and the great man of letters, Dr Samuel Johnson, tracing young Barber’s journey from the horrors of Jamaican slavery to the heart of London’s literary world. Such was the strength of their friendship that on his death Johnson left the bulk of his estate to Barber – at the time a scandalous legacy.

Michael Bundock said: ‘I’m delighted that the book has been so well received, and very pleased that it has been shortlisted for such a prestigious prize. Barber’s story is a remarkable one, and deserves to be much better known.’

The judging panel will be Damian Barr, Fiona MacCarthy, and James Naughtie.