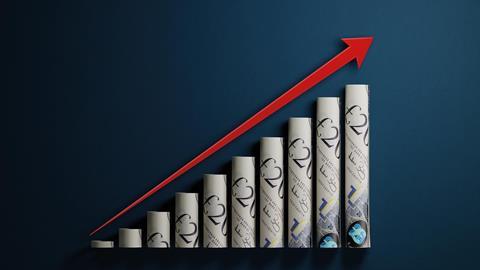 City solicitors are ‘pinching themselves’ after a bumper results season that saw firms celebrate double-digit profit growth and record revenue.

Results published in July and August reveal a successful year of trading, from the early stages of the pandemic in April 2020 to the easing of lockdowns in spring 2021. The magic circle firms enjoyed a particularly strong period, with profit per equity partner (PEP) ranging from £1.77m to £1.91m. Partner profits at Macfarlanes came out on top, however, exceeding £2m for the first time.

I was sitting with firms in March and April last year and thinking ‘are results going to be down 20%, 30%, 40%?’. We had no idea what the market was going to be like during a pandemic

Among the magic circle, Allen & Overy reported the biggest increase in profitability, with pre-tax profit rising by 19% to £822m. Close on its heels, net profit at Linklaters rose by 12.2% to £815.3m. Revenue growth was more muted, at 5% and 2.1% respectively.

The success practices experienced during lockdown was largely unexpected. In response to a highly unpredictable market, firms introduced a range of measures in 2020, including cutting hours, reducing the salaries of newly qualified solicitors, suspending pay reviews, and reducing partner drawings. Almost all these measures have since been withdrawn.

‘It was a surprisingly good year,’ said Tony Williams, principal of legal consultancy Jomati and former managing partner at Clifford Chance. ‘I was sitting with firms in March and April last year and thinking “are results going to be down 20%, 30%, 40%?”. We had no idea what the market was going to be like during a pandemic.’

Top-tier international firms have benefited from a surge in mergers and acquisitions, with Allen & Overy citing ‘exceptionally high levels of M&A activity’. With record low interest rates and central banks and governments turning on the tap, private equity firms have embarked on an acquisition spree that, according to commentators, has kept the markets buoyant ever since.

It’s not just M&A that has proved bullish. Withers reported a ‘really strong set of performances’ across all of its teams, with arbitration and employment proving ‘exceptionally busy’, while Clifford Chance saw ‘significant peaks’ in refinancing, restructuring and insolvency.

‘After going into hibernation, a lot of clients have decided to just get on with a range of things,’ said Williams. ‘Firms I’ve been talking to across the board, possibly with the exception of commercial real estate, have all been doing pretty well.’

Many firms have noted very strong growth in their US offices, galvanising a range of international expansion strategies. Freshfields, for example, recently opened a seven-partner office in Silicon Valley, and bolstered its technology, life sciences and antitrust practices with new hires in New York and Washington. In August, Allen & Overy became the second magic circle firm to open in Silicon Valley in a bid to grow its technology practice.

According to research by Thomson Reuters, the US legal sector enjoyed its most successful period ever this year, performing at a record level in the second quarter of 2021. Demand and productivity were both up 7.3% year on year, with M&A lawyers and real estate lawyers enjoying a bumper season. Demand is up compared with 2019, before the pandemic hit, as a result of ‘tremendous growth’ this year.

As we emerge from the pandemic, there is uncertainty about whether the legal sector can sustain such high levels of growth. In the UK, at least, rises in profit were partly fuelled by a fall in expenses and cost-saving measures. Nobody was travelling, no clients were being entertained, and the majority of staff were not in the office, encouraging many firms to scale back their premises. Many of these costs are likely to return as the corporate world hums back into life this autumn.

Then there are fees. The City’s battle for young talent has now reached fever pitch, with firms repeatedly boosting NQ pay to attract high-flying graduates. NQs at Quinn Emanuel Urquhart & Sullivan will be paid almost as much as the mayor of London after a pay rise set their salary at £146,000. Meanwhile, all the magic circle firms now offer a minimum of £100,000 to NQs, and Bryan Cave Leighton Paisner and Ashurst have increased pay to £88,000 and £90,000 respectively.

Will clients start to question how much they are being charged as life returns to normal? ‘I think there was probably less pressure on fees in the last six or nine months than there has been in the past,’ said Williams. ‘Clients were just more anxious to get deals done than argue as much about fees. I don’t think you can expect that to continue.’

The highest echelon of London-based firms, which competes for multi-billion-dollar mandates, is under pressure to keep remuneration high in order to fend off US competition – even at partner level. Lockstep remuneration structures are being reviewed to address this very issue. But for now, pay is high and activity is booming.

‘It’s difficult to see any slowing down in activity, certainly for the rest of this calendar year,’ said Williams. ‘It would be very brave to look much beyond that.’