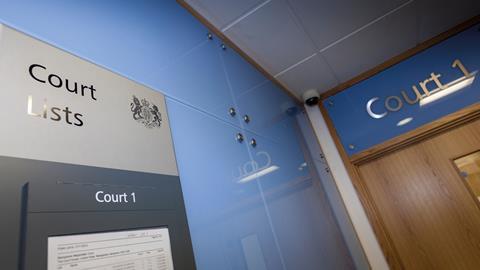 News focus: All hands to the pump in court recovery plan

HM Courts & Tribunals Service has produced a recovery plan to resuscitate pandemic-hit courts facing a backlog of cases. But this raises as many questions as it answers

We know two things about the fallout from the pandemic in our courts: there is now a massive backlog of cases; and something needs to be done about this.

Other than that, speculation and rancour surround the conversation about how to clear the backlog – as the Ministry of Justice intends to – by next spring.

HM Courts & Tribunals Service last week sought to allay some of the uncertainty by publishing a recovery plan. The message was ‘all hands to the pump’: additional court hours will be introduced from this month and extended further from the autumn.

There was also confirmation that 10 alternative sites – likely to be dormant hotel conference areas or council-run facilities – have been identified as so-called Blackstone courts that can open from August. We don’t yet know where. There was no mention of the controversial proposal to remove juries for some either-way trials and replace them with a single judge and two magistrates, amid some reports that the plans could be dropped following trenchant opposition by the legal profession.

The problem with the recovery plan is that details are sparse while dates were seemingly set in stone. Even after the plan was published, MoJ insiders admitted nothing concrete had actually been decided. If court hours are to be extended this month, by how much? In what jurisdictions and which courts? What consideration, if any, will be paid to court users with caring responsibilities? And whatever happened to the pilot scheme run at Manchester and Brentford earlier this year that was designed to test the efficacy of opening courts for longer? The full evaluation is, we understand, still being worked on and is not expected to appear until the end of this year at the earliest. Still, its conclusions could be moot if the courts have already opened for longer anyway.

Lawyers have long held concerns about extended and weekend hours, not least over what seems to be an assumption that they have time to spare. As one solicitor has pointed out, it is like saying that a theatre actor’s working day starts with curtain up and ends with curtain down – ignoring the preparation that goes into any public appearance.

There might also be concern about the public perception that lawyers are failing to ‘do their bit’, instead seeming to block what the government will frame as legitimate and necessary requests. And there are also sceptics who believe the government floated the unpalatable idea of non-jury trials with the intention of meeting the profession in the middle by keeping juries and extending hours.

HMCTS says it is in discussions with representative bodies, but common ground may be hard to find.

Simon Davis, president of the Law Society, welcomed the publication of the recovery plan and its intention to reopen courts. But he added: ‘Introducing extended working hours for already beleaguered judges, practitioners and court staff needs to be treated with utmost caution – as they pose risks for all involved, including of course the victims of crime and the parties in sensitive family cases.

‘Before looking at extended hours, the Ministry of Justice must ensure that it is making maximum use of normal court hours and the existing court estate, with no restrictions on judges sitting while there are courtrooms (real, virtual or Blackstone) available.’

How lawyers can mobilise to prevent extended court hours is hard to tell. There has been chatter of downing tools in the past, but it would be a risky strategy. Amid uncertainty, we can only return to what is known for definite. In March, almost half of all courts were closed and jury trials were paused. More than 40,000 cases are in limbo waiting to move to the Crown court.

HMCTS has a diminished court estate (the decision to close hundreds of courts since 2010 now looks especially short-sighted) and must cater for strict social distancing rules for the foreseeable future.

Lord chancellor Robert Buckland QC insisted that all options are on the table: ‘This demands a new perspective on the way we deliver justice.’

Weekend and evening sittings will be bitterly opposed by many, but the politicians seem determined to change the way the justice system works. However unpalatable the details, that at least is a certainty.