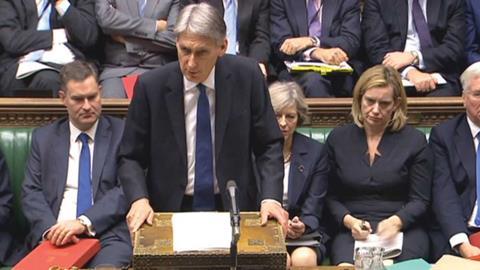 Chancellor Philip Hammond dealt a blow to motorists hoping for a whiplash premium ‘premium’, but gave welcome clarification on the future status of Land Registry.

Drivers looking forward to the nebulous yet much-hyped £40 cut in motor premiums promised in the wake of whiplash reform should prepare to be disappointed. In last week’s autumn statement, chancellor Philip Hammond said that the standard rate of insurance premium tax will rise from 10% to 12% from June 2017.

Huw Evans, director general of the Association of British Insurers, lamented: ‘This marks a doubling of insurance premium tax since last year and to claim a consultation on whiplash reforms, which hasn’t even gone before parliament yet, will offset this just won’t cut it.’ The Association of Personal Injury Lawyers declared that motorists could ‘wave goodbye to the supposed £40 saving’, while national firm Thompsons dismissed the insurance industry’s anger as disingenuous.

A Thompsons spokesman said: ‘The insurers have attacked today’s announcement of a rise in premium tax as “outrageous” – saying the government gives with one hand via whiplash reforms and takes with the other in IPT. What arrant nonsense!

‘The insurers will, as they always have, simply pass it on in higher premiums without it touching their bottom line. [They] conveniently don’t mention the straight “gift” of a minimum of £200m extra profit from the whiplash reforms (as calculated by the government).’ The chancellor’s IPT increase could also affect levels of indemnity insurance paid by law firms, as well as after the-event insurance taken out to fund litigation.

Elsewhere, in an unexpectedly firm commitment, Hammond formally killed off a long-running plan to transfer Land Registry to the private sector. ‘Following consultation the government has decided that HM Land Registry should focus on becoming a more digital data-driven registration business, and to do this will remain in the public sector,’ his statement said.

The consultation, the second in two years, had proposed transferring Land Registry operations to a ‘NewCo’ with a private sector shareholding. The plan attracted strong opposition from the legal sector, including the Law Society.

First signs that the government was having second thoughts emerged in September when privatisation proposals were dropped from the Neighbourhood Planning and Infrastructure Bill. However, until last week government sources were insisting that no decision had been taken.

Hammond’s statement followed the announcement of a contract to create a central register of local land charges data, to be managed by Land Registry.

It said that ‘modernisation will maximise the value of HM Land Registry to the economy, and should be completed without a need for significant exchequer investment’. Law Society chief executive Catherine Dixon welcomed the clarification: ‘This decision puts the public interest in this important institution first. We look forward to working with the Land Registry to assist it in delivering its ambitious modernisation plans.’

Conveyancing Association chair Eddie Goldsmith said: ‘The vast majority of our members were in favour of the Land Registry remaining in the public sector, so we are clearly very supportive of today’s clarification.’ He added: ‘Interestingly, the autumn statement [gives] a steer that Land Registry should focus on its core role of registration and delivering this through a digital process, which one assumes should include such things as e-signatures.

‘We are fully supportive of moves towards an up-to-date digital conveyancing service. If we’re able to see the Land Registry moving swiftly in this direction then this ambition will be achieved much more quickly.’

There was also a surprise announcement from Hammond on employees called to give evidence in court, who will no longer need to pay tax on legal support from their employer.

Tax relief for legal support will ‘help support all employees and ensure fairness in the tax system’. At present, only those requiring legal support because of allegations against them can take advantage of the relief.

However, Nicholas Robertson, head of the London employment group at international firm Mayer Brown, said the change would be of ‘very limited impact’ for most employees, noting that those who are witnesses will not usually need legal advice.

He said: ‘In many cases the employee’s interests and the employer’s interests coincide. So if there is a point where the individual wants to know the legal answer to something, and

the employer agrees that it would be helpful to know the answer, then the employer’s lawyers can provide it as part of their remit for the employer.’ Robertson said there will be rare cases where witnesses may wish to take their own legal advice, ‘so levelling the playing field for those who are the subject of allegations and those who are wanting advice for other reasons seems sensible and fair’.

Another partner at the firm, corporate tax specialist James Hill, said the tax relief for legal support was a relatively minor point in the wider context.

Treasury documents state that, following consultation, the tax and employer National Insurance advantages of salary sacrifice schemes will be removed from April.

Exceptions will be made for arrangements relating to pensions (including advice), childcare, cycle to work and ultra-low-emission cars. Employees swapping salary for benefits will pay the same tax ‘as the vast majority of individuals who buy them out of their post-tax income’, the Treasury said.

Arrangements in place before April 2017 will be protected until April 2018.

Arrangements for cars, accommodation and school fees will be protected until April 2021.

Tax advantages linked to shares awarded under the ESS will be abolished for arrangements entered into on, or after 1 December. The status itself will be closed to new arrangements ‘at the next legislative opportunity’.

The Treasury says this is in response to ‘evidence suggesting that the status is primarily being used for tax planning instead of supporting a more flexible workforce’.

On the related subject of avoidance, the chancellor’s ongoing clampdown continues to worry advisers, with Pinsent Masons hitting out at what it described as the ‘continuing war on professional firms’.

Hammond announced that the government will consult on requiring intermediaries arranging complex structures for clients holding money offshore to notify HM Revenue & Customs of the structures and the related client lists.

Jason Collins, head of tax at Pinsents, said the requirement would potentially affect lawyers, accountants, banks, fund providers, and trust and company service providers, both in the UK and overseas. He added: ‘One has to wonder why this is needed given that the common reporting standard is effective this year and will provide much of this information anyway.’ Collins noted that while the common reporting standard is an international measure, the new step is taken by HMRC on its own. ‘This is another example of the UK wanting to drive the agenda,’ he said.