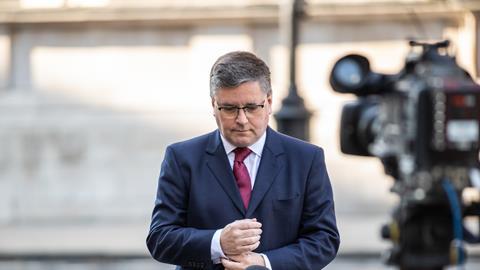 The Faulks review has prompted hundreds of responses, amid anger that not all will be published. Councils and bankers are among advocates of a mechanism that will not be surrendered lightly

Last month former Tory justice minister Lord Faulks (Edward Faulks QC), who is leading the review, told Tomlinson that the full text of submissions would not be published. Faulks expects the final report to include a summary of responses, quotes or excerpts.

Fortunately, many respondents have gone public anyway. The UK Administrative Justice Institute has provided a public forum on its website where submissions can be collected and shared – and it appears that defenders of the current judicial review system have a wide range of allies.

One such is UK Finance, successor to the British Bankers Association, which represents around 300 businesses in the banking and financial services sector. In its submission, UK Finance says judicial review is the mechanism through which banking and finance regulators are meant to be held accountable under the law.

Agreeing with other respondents that judicial review is not an overused process, UK Finance says: ‘The importance of maintaining effective engagement with regulators that exercise close oversight of their activities and decisions means that larger firms in particular are loath to pursue a judicial challenge.’ Time, cost and resource, combined with uncertainty of outcome, further deter challenges to regulators’ decisions.

‘Nonetheless, judicial review is currently the principal, if not only, mechanism available to market participants in the event they wish to challenge a decision of a banking and finance regulator. Given this, and notwithstanding the shortcomings of judicial review as a challenge mechanism, we believe it would be severely detrimental if the route to judicial review and/or the judicial review process itself were made even more onerous. On this basis, we would strongly advocate that any changes proposed avoid putting in place additional barriers or restrictions,’ the trade body says.

Local government also favours the status quo. Lawyers in Local Government says: ‘We consider strongly that there is a positive case for the ongoing scrutiny of public decision-making and, as such, we broadly consider that the current judicial review regime is fit for purpose.

‘It enables effective advice to be given within local government to engender robust and lawful decision making, while protecting access to justice. The system remains of profound importance in ensuring that the judiciary is separate from the executive.’

LLG criticises questions in the call for evidence posed exclusively to government departments. Civil servants are asked if certain aspects of judicial review ‘seriously impede the proper or effective discharge of central or local government functions’.

LLG says the questions ‘sit uncomfortably’ with, to quote the panel, the ‘importance of maintaining the rule of law’.

The Home Office had the second highest number of judicial reviews lodged against it. The department has submitted evidence but this has not been made public.

Buckland told the human rights committee: ‘After a generation of expansion of administrative law… I do think that ascertaining whether the changes strike the right balance is timely and appropriate now.’

He added: ‘Administrative law has evolved, no doubt evolved in a way that does start to bring judges closer to issues that look more like merits-based decisions. It is vital we take stock, reflect on where we are and make sure judges are in a safe place and we do not inadvertently sow the seeds of politicisation that I do not think any of us want to see.’