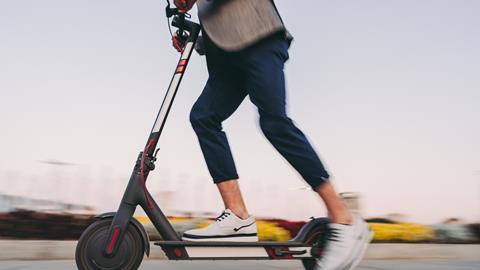 The rising number of e-scooters on our roads and subsequent increase in accidents has highlighted a legal lacuna. But a new test case could finally deliver some clarity

If you live in a town or city, chances are you have either ridden an e-scooter or have a tale of narrowly avoiding one. They seem to be everywhere.

The issue with the two-wheelers is that their popularity is growing, while the legal position on their use appears increasingly obsolescent. A further complication is that e-scooters rented as part of government-backed trials can be used on public roads.

The problem is no better encapsulated than by the retailer Halfords, which advertises several models for sale on its website and on the same page guides customers to a legal notice. This states that electric scooters are illegal to ride on public roads, on pavements, in cycle lanes and in pedestrian-only areas. Given such restrictions, one wonders what exactly the point of buying one might be.

The prevalence of e-scooters on our roads – even those not meant to be there – has inevitably increased the rate of accidents and injuries suffered by riders and members of the public with whom they collide. Now, it has emerged, the law could potentially be tested by a case brought by London firm Bolt Burdon Kemp regarding whether riders can expect the same legal protection as other road users.

The claimant, a man in his fifties, suffered multiple fractured ribs, a dislocated right shoulder and a collapsed lung when he was in contact with the wing mirror of a bus last summer. Liability investigations are ongoing and no formal decision has been received from the defendant’s insurer.

BBK associate Ben Pepper said his client was wearing a hi-visibility jacket and a helmet when the incident happened and took reasonable precautions to ride his e-scooter safely. He told The Times that a cyclist with similar injuries would be able to claim for compensation and asked why the situation was different for an e-scooter.

Pepper added: ‘We hope this case will help to give clarity to the legal position for those injured in e-scooter accidents where the privately owned e-scooter was being ridden on a public road. But we urgently need new legislation to make e-scooters safer for riders and other road users and to enable injured people to access compensation.’

'To help ensure they can reach their potential, it is essential that the government develops robust regulations around their construction and use, so that e-scooter travel can become as safe as possible'

Some question why a rider acknowledged to have been riding illegally should be able to make a claim, making the comparison with a burglar suing for injuries suffered during the course of a crime (an example occasionally reported but with few examples on record of any legal action being successful).

Pepper said the fact the e-scooter was being ridden illegally has nothing to do with the alleged negligence of the driver in the collision. He argues that the rider is no different to a cyclist, pedestrian or other vulnerable road user in terms of expecting drivers to take reasonable care.

It is a case that – if successfully pursued – could open the way for more claims. There were 484 casualties in reported road accidents involving at least one e-scooter vehicle in Britain in 2020. Information held by the Department for Transport provisionally indicates that 530 casualties were reported in the first six months of 2021. Research from the Parliamentary Advisory Council for Transport Safety found that over a four-week period last June, in Bristol, 90 people presented to emergency departments after e-scooter-related incidents.

Matthew Avery, chief strategic research director at motor insurers’ research centre Thatcham, said: ‘Before the mobility benefit of e-scooters can be realised, regulation is urgently required. In the absence of prompt action, e-scooter travel, which could be 100 times more dangerous than riding a bicycle, will continue to present a real risk not only to users but also to pedestrians, drivers and people living with disabilities.’

The Association of British Insurers stressed that it would not comment on a particular case, but agrees that ministers must step in to clarify the law around e-scooter use.

Laura Hughes, the ABI’s manager of general insurance, said the organisation shares the government’s vision of a greener and more inclusive transport system, but the current position is unsustainable.

‘At present, used illegally on the roads and pavements, e-scooters are dangerous to their owners, other road users and pedestrians,’ said Hughes. ‘To help ensure they can reach their potential, it is essential that the government develops robust regulations around their construction and use, so that e-scooter travel can become as safe as possible.’