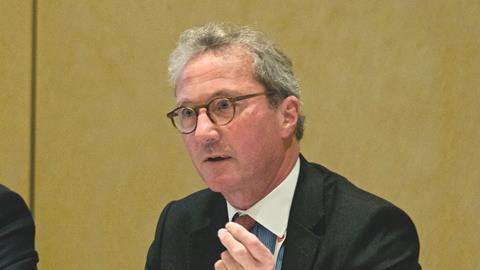 The next event in the ‘GREAT’ campaign to promote the UK’s legal services internationally will be hosted by the lord chancellor in London next month, justice minister Lord Keen of Elie QC has told the Gazette. Keen, advocate general for Scotland and Ministry of Justice spokesperson in the Lords, attended last week’s annual conference of the International Bar Association in Sydney, Australia, to promote UK jurisdictions in the face of mounting international competition.

Keen indicated that he is eager to work with the Law Society and law firms to make the ‘Legal Services are GREAT’ campaign a success.

He told the Gazette the campaign would succeed only with the ‘co-operation and considerable experience of the professional bodies such as the Law Society and Bar Council’, as well as strong local law societies including the City of London Law Society.

He acknowledged that, while it ‘tends to inevitably be London-centric, because London is one of the pre-eminent dispute resolution centres’, the campaign would also promote the regions and devolved administrations, including the dual-qualified barrister’s native Scotland.

He called upon solicitors to take part: ‘There is certainly an opportunity for law firms to do so, and indeed we are anxious that they do. Not only will they contribute to the success of the campaign, but I hope they will also get something out of it as well.

‘We hope that in November the lord chancellor will host an event in London which will underline the Ministry of Justice’s commitment.’

Keen underscored the judiciary’s support of the initiative, referring to work by former lord chief justice Lord Thomas to inform UK ambassadors and high commissioners about the importance and value of international legal services, ‘to which we have received a very positive response’, he said.

Keen praised the role of UK commercial law firms, saying that they had been ‘very successful across the globe. Wherever I have travelled, from New York, Singapore [to] Sydney, I will find English law firms, or their associates, already in place’. He called this ‘an extension of what I might term “soft power”. Not only [is] their success important, but it sends a message that the UK remains an outward-looking and successful country’.

He acknowledged the prospect of competing foreign jurisdictions: ‘Imitation is the highest form of flattery, and we see imitation across the globe.’ But he said that such ventures, as in the Netherlands, which has announced plans to allow commercial proceedings to be conducted in English, would not have a clear run. Setting up the Dutch venture would be ‘challenging, as the centre of the common law is but a short distance away in London’, he insisted.

Keen also addressed a showcase session at the IBA on Brexit, stressing again his belief that the UK would remain a pre-eminent legal centre. But he acknowledged that ‘there will be challenges’ as the UK moves away from the EU legal system. There were, he noted, issues that remain to be decided on choice of law and jurisdiction, and regarding dispute resolution. But overall he was confident, predicting that in the case of arbitration, for example, there would be ‘little change after Brexit’.

With litigation, he acknowledged that there is potentially more at stake, but stressed the importance of mutual recognition over issues ranging from jurisdiction to enforcement to insolvency – a principle as important to the UK as it is to other commercial jurisdictions.

Keen also discussed the idea of a continuing role for the Court of Justice of the European Union, making it clear that, given a decision to leave the single market, a continuing jurisdiction for the CJEU was ‘not feasible’ after Brexit. Once Britain had left the EU, the court’s interpretive role would be conducted for the benefit of the remaining EU member states alone and so ‘cannot go on’.