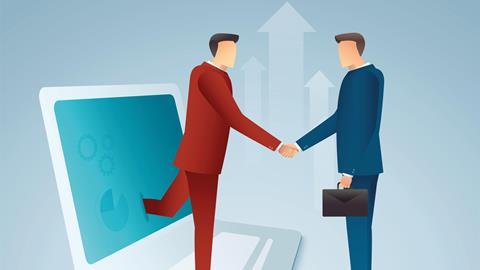 News focus: Online resolution for SMEs is good to go

We now have a vision of what a financially self-sustaining online dispute settlement system for SMEs will look like. But who is going to take the plan forward?

Just a year after the master of the rolls outlined a vision of an ecosystem of online fora becoming the front end to the civil dispute resolution system, we now have a definitive vision of what a key component will look like. The government-backed LawtechUK project has published a feasibility study and proof of concept, including a ‘high level technical design’ for an online dispute resolution system for small and medium-sized businesses (SMEs).

The concept is for a three-tier system for resolving payment disputes involving SMEs from initial anonymous enquiry, through the engagement of both parties to find a point of agreement, to referral to an independent adjudicator/mediator. The design meets two essential criteria of Sir Geoffrey Vos’s plan: it is open to anyone to build, whether incorporated in business software, or as an offering to members of trade associations and the like.

And, when all else fails, it will generate a dataset that will feed directly into HM Courts & Tribunals Service for the – it is hoped – tiny minority of disputes needing to go to court. It would thus qualify for Vos’s proposed ‘blue tick’ accreditation for dispute resolution systems. Eventually a patchwork of blue-ticked portals is supposed to create what the master of the rolls calls ‘the ultimate front end, a website to which anyone or any lawyer with any kind of dispute could go’.

SME payment disputes were picked by LawtechUK as a classic piece of low-hanging fruit. Late or non-payment of debt accounts for nearly three-quarters of all disputes faced by SMEs. Many disputed debts are not pursued, either from wariness about legal costs or fear of breaking down a business relationship. The idea of the online system, modelled in part on British Columbia’s Civil Resolution Tribunal, is to resolve disputes quickly, cheaply and, if possible, amicably.

The concept, drawn up by academics Dr Mimi Zou and Professor Tom Melham of Oxford University, is for a platform which will lead parties through three dispute resolution tiers:

If the parties fail to agree, the system would create a ‘data bundle’ formatted to be handled by HMCTS in the county or High Court. ‘Currently this process would require some manual attention but can be made much easier by the platform providing a carefully designed export tool,’ the feasibility study notes.

The study, which includes a high-level technical design, says the platform could be built within nine months at a cost of £3.5m and become financially self-sustaining within a short period. It also lays out a business case for aspiring providers, estimating the platform could empower UK businesses to resolve more than 200,000 disputes over five years, accounting for £3.4bn in debt value.

The big question is who will take the plan forward. LawtechUK has no ambition – or, indeed, the financial means – to build the platform itself. The expectation is that a software firm or trade association will take it up. ‘We’ve produced a playbook for the private sector,’ Jenifer Swallow, the outgoing head of LawtechUK, told the Gazette. ‘Anybody can take it on and build it.’

It is also possible that the government will find some resources. The lawtech sector lost its minister with the resignation of Lord Wolfson in April, and as the Gazette went to press it was unclear who will take on the brief. But there are clear signs that the online courts agenda is gaining traction. A crucial step was taken in April when the Judicial Review and Courts Act 2022 established the Online Civil Procedure Rule Committee, with a cross-jurisdictional remit for civil and family justice and tribunals.

It is possible that the term ‘Vos courts’ or – as the master of the rolls would no doubt prefer it ‘Vos resolutions’ – is about to enter the legal lexicon.