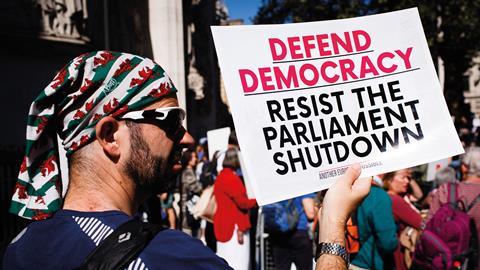 If there was any doubt about how the legal profession would react to the ideas floated by Lord Faulks’ review of administrative justice, they were dispelled this week. Professional bodies and specialist firms were unanimous in questioning the premise underlying the government’s decision to set up the inquiry: that judicial review is a novel and undemocratic threat to effective administration.

‘Judicial review has a vital place in the UK’s constitutional balance of powers between the executive, parliament and the courts,’ said Law Society president David Greene. ‘It must continue to have the teeth to provide a check on misuse of executive power, by whichever government of the day, and to ensure accountability of all public bodies.’

In a statement London firm Bindmans, which has been responsible for many high-profile judicial review challenges, described the review’s starting point as ‘highly problematic’: ‘Once the proper role of judicial review is understood, there is no “balance” to be struck between the existence and availability of judicial review and effective government because, to be genuinely effective in a democracy, government must act lawfully and be accountable through the courts.’

This view was echoed by the Bar Council, which said judicial review is critical to securing the ‘proper and effective discharge of [government] functions’.

Another premise, what the bar called ‘the view expressed in political circles that the judges have been guilty of judicial overreach’ also met a firm response. Both the bar and the Public Law Project pointed out that the highest-profile review of recent times, the judgment in Miller on the prorogation of parliament was a ‘highly unusual’ one. As such, the ruling should not have any implications for the more routine, but constitutionally vital, exercise of judicial review, the Bar Council said.

Most of the respondents deployed statistics suggesting the number of judicial reviews handled by the Administrative Court is falling, not rising. And the Law Society pointed out that judicial review cases are settled before court roughly half of the time (49%).

Nearly everyone agreed that judicial reviews, in Bindmans’ words, ‘impact on a tiny proportion of administrative decisions and the impact is overall positive with many cases being settled or won’. Their mere existence ‘spurs public authorities to make sound decisions in the first place’. The firm concludes: ‘It is a very efficient system, overall.’

This is not to say that the process is perfect. While the Faulks inquiry has yet to propose possible reforms, the bar saw two areas of interest. First, a sense that the courts may have been taking a wrong turn, conceptually and practically, over the past 40 years. Second, a collection of immediate issues, such as the rules on standing, costs and the duty of candour.

With this presumably in mind, the call for evidence asked if there is a case for statutory intervention in the judicial review process. Not yet, said the bar, warning this would require ‘a major law reform project’ in which the ‘risks of unintended consequences are very great’.

Also arguing against the nuclear button, the Law Society set out four reforms it said would reduce the need for citizens to resort to the courts to challenge decisions by public bodies:

Virtually every respondent to the call for evidence made a broader point: that if the government wants to cut the burden of judicial review, the first step is to ensure administrative decisions are legal in the first place. One of the few safe bets about the outcome of the review is that Faulks will concur.

But to get there he will have to tackle another issue raised in the Bindmans response: that the supposedly evidence-based review has been given hardly any time and resources to gather and analyse evidence, and thus faces ‘an impossible logistical challenge’. Lord Faulks will certainly not be short of reading matter as the nights draw in.