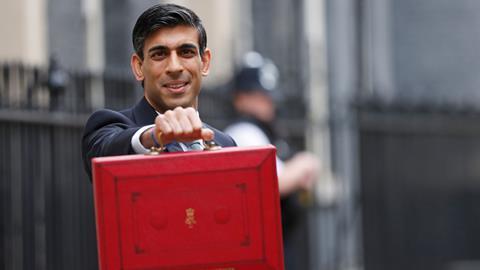 News focus: What the budget means for lawyers

Despite Rishi Sunak’s support for domestic violence programmes, an extension to the SDLT holiday and a boost for legal services innovators, the budget had little to say about justice

Leaders of the legal profession were quick to point out one gap in chancellor Rishi Sunak’s ‘spend now, tax later’ budget: the justice system. The 107-page ‘Red Book’ contains one paragraph on justice: ‘The government has provided £450m in 2020-21 to support the justice system in England and Wales, including funding to ensure safety in prisons and courts and funding to reduce backlogs in the Crown court caused by Covid-19.’

‘We are disappointed,’ Law Society president David Greene said. ‘We urge the government to invest further in the justice system, to ensure the public can access the justice process for the issues facing them during and following the Covid-19 pandemic.’

'We urge the government to invest further in the justice system, to ensure the public can access the justice process for the issues facing them during and following the Covid-19 pandemic'

However, the budget did contain some good news. An extra £19m for domestic violence programmes to reduce the risk of reoffending was widely welcomed.

The Society was also pleased by the much expected announcement of an extension to the stamp duty land tax holiday to 30 June. A three-month tapered transition period from 1 July ‘will give the property market a chance to maintain momentum’, said Charley Lowe, an associate at London firm Wedlake Bell. Elizabeth Bradley, global head of tax at Bryan Cave Leighton Paisner, said: ‘There will be a huge sigh of relief for those already on track to buy their property as this should avoid a difficult conversation about who was otherwise going to bear the stamp duty cost if they had missed the completion deadline of 31 March.’

Michael Wistow, global head of tax at McCarthy Denning, said: ‘Governments keep forgetting that reducing tax rates will often raise more revenue as transactions increase – the stamp duty holiday is a case in point. It should be made permanent.’

This argument could also be made about the chancellor’s headline tax-rise, the six percentage point increase in corporation tax for larger companies, from 2023. According to the SRA’s regulated population statistics, more than 5,000 law firms are incorporated companies.

On another front of the battle to rescue the public finances, the chancellor heralded new proposals for tackling ‘promoters of tax avoidance’. These came in a response to a Treasury consultation last year. Proposed changes include tougher disclosure rules, requiring information about schemes to be provided to the authorities at an earlier stage of inquiries. ‘This would be achieved through a proposed new information power, which would require the provision of all documents and information that relate to the arrangements or proposed arrangements in question.’

The government will consult on the implementation of OECD rules to combat offshore tax evasion by facilitating global exchange of information on cross-border tax arrangements.

Reform aimed at making the penalty regime for VAT and income tax self-assessment fairer and more consistent was widely expected. A new points-based regime will impose a financial penalty only when the relevant threshold is reached. Interest charges on late VAT payments will be aligned with other tax regimes.

Rupert Shiers, head of tax disputes at international firm Hogan Lovells, described the predicted yield as surprisingly high. ‘The detail will be interesting,’ he added.

There were also a couple of announcements of interest to legal services innovators. The UK Listings Review, carried out by Lord Hill of Oareford (Jonathan Hill, the UK’s last EU commissioner), proposed reforms to make a London Stock Exchange listing more attractive to entrepreneurs. These include allowing dual class share structures in the main market, to give company founders enhanced voting rights on certain decisions.

Another was the publication of the Kalifa review of the so-called fintech sector, which made recommendations on the regulation of artificial intelligence and crypto-assets in its call for a ‘comprehensive fintech strategy’. Greene noted the strong overlap with the lawtech sector: ‘Growth of one is dependent on the success and growth of the other.’

Meanwhile, the temporary increase in capital allowances announced by the chancellor may encourage more legal businesses to invest in technology.

The sector’s expected 5-6% growth this year should be enough to ensure that at least this aspect of the justice system catches the chancellor’s eye.