A barrister convicted of contempt of court after leaking a Supreme Court judgment about Heathrow Airport has denied carrying out a ‘publicity stunt’, arguing that the justices wrongly disregarded his intentions and failed to act impartially.

Tim Crosland, an unregistered barrister and director of climate group Plan B Earth, was fined £5,000 and ordered to pay costs of £15,000 by three Supreme Court justices in May. The justices found Crosland to have been in criminal contempt of court for deliberately disclosing the result of a Supreme Court appeal about Heathrow’s third runway 22 hours before the embargo was lifted.

At an appeal in front of five different Supreme Court justices this morning, Crosland put forward three grounds of appeal. He first argued that the three Supreme Court judges who heard the contempt proceedings had wrongly disregarded his intentions, beliefs and motivations when he leaked the judgment. 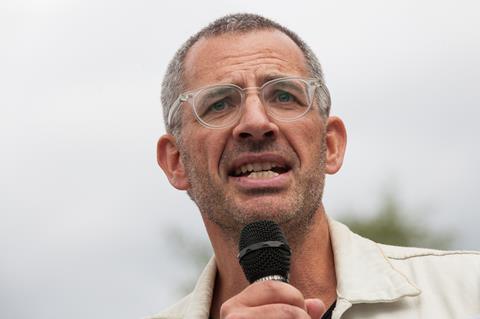 Crosland: Three Supreme Court justices were 'not independent or impartial' in May judgment

He also argued that the three-person Supreme Court panel 'was not independent or impartial’ and that the costs they ordered him to pay were ‘arbitrary and unjust’.

Crosland - who represented himself - told the court this morning that he broke the Heathrow embargo in order to expose the government’s ‘extraordinary and deadly error’ in assessing Heathrow expansion plans against ‘historical and discredited’ temperature goals, rather than against the Paris Agreement. ‘I needed to be something more than a disappointed litigant complaining about facts being missed from the judgment,’ Crosland said. ‘You disrupt in order to gain attention.’

For the attorney general, Aidan Eardley stressed that Article 10 of the European Convention on Human Rights is ‘not about a right to be listened to or heeded’.

‘Whether [the original Heathrow] case was rightly decided or wrongly decided, the operation of the embargo didn’t affect his ability to publicise Mr Crosland’s disagreement with it,’ he said.

The case was heard by Lord Briggs, Lady Arden, Lord Kitchin, Lord Burrows and Lady Rose and judgment was reserved.