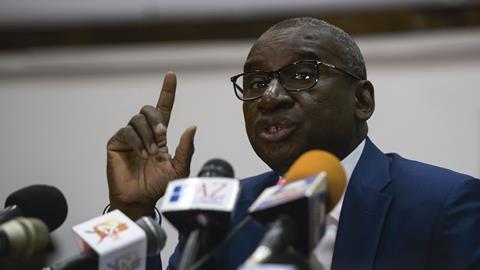 With the withdrawal of three African countries, is the future of the International Criminal Court in doubt? Eduardo Reyes reports.

Is the International Criminal Court crumbling before our eyes? That was the headline question posed by Foreign Policy magazine as the Gambia followed Burundi and South Africa in withdrawing from the Rome Statute, the ICC’s founding treaty.

These are three signatories out of 124, so on the face of it this does not look a knockout blow. Even in the context of African signatories, 31 countries remain, including nations that have been critical of the withdrawals. The president of the ‘Assembly of State Parties’ (nations that signed the Rome Statute) is Senegal-born Sidiki Kaba (pictured), and his press conference following the withdrawal of Burundi was held in the Senegal capital Dakar, not the calm suburb that houses the ICC in The Hague.

Withdrawal, Kaba warned, represented ‘a setback in the fight against impunity and the efforts towards the objective of universality of the statute’. Meanwhile, Amnesty International, a strong supporter of the ICC, called the Gambia’s withdrawal ‘a drastic blow’. The fear is that more withdrawals will follow.

The ICC’s chief vulnerability lies in its track record – it has so little to show when set beside the scale of its ambition.

It is not judged by the standard of the Nuremberg and Tokyo trials after the second world war, but by the record of the International Criminal Tribunal for the former Yugoslavia (ICTY).

The ICTY indicted 161 individuals, and 161 were convicted, acquitted or died. It did not risk hubris with the pre-emptive construction of a large purpose-built headquarters (the ICC’s Hague HQ cost $240m), but carved out spaces for trials, cells, lawyers and staff in a former insurance office.

Its practices and procedures were patched together from scratch, powered by international outrage at the scale of the war crimes committed in the former Yugoslavia. Its operation grew with its prospects – and has shrunk with the conclusion of its cases.

By comparison, the ICC, and its 800 staff, are sitting targets.

So why not simply constitute ad hoc tribunals as happened with Yugoslavia, and subsequently Rwanda and Lebanon?

The answer is that ad hoc tribunals require too much consensus – their creation can in effect be vetoed. Russia has prevented the establishment of a tribunal to look at events in Ukraine, and would not now allow the creation of the Yugoslav tribunal – sympathy with Serb nationalism runs too high in Russia, and the parallels of the Serb nationalist record with the way Russia comports itself within its spheres of influence are too close for comfort.

Through the Rome Statute, the ICC seeks to circumvent the need for diplomatic acquiescence for its activities. Justice should come first, with political expediency way down the list. It aims for ‘universality of justice’. This, of course, arouses the suspicion of several nation states, some of which have retained PR agencies to rubbish the ICC.

To achieve credibility from the start, the ICC used nearly all the procedures, rules and policies crafted, tested and proven by the ICTY. But against the ICTY’s remarkable record – that 161/161 figure – the ICC has issued just four verdicts: three guilty, one not guilty.

Verdicts are its key performance indicator, and it does not have many.

What South Africa, Burundi and the Gambia want is a return to expediency. South Africa’s notice of withdrawal admits as much.

‘The Republic of South Africa is committed to fight impunity and to bring those who commit atrocities and international crimes to justice,’ international relations and cooperation minister Maite Nkoana-Mashabane wrote, adding that her country, ‘has found its obligations with respect to the peaceful resolution of conflicts at times are incompatible with the interpretation given by the International Criminal Court of obligations contained in the Rome Statute’.

South Africa had ignored a tribunal order to arrest Sudanese president Omar Hassan al-Bashir, who made open visits to the country. The rule of law, South Africa decided, cannot be allowed to interfere in regional power play.

As the three withdrawing countries kick against the ICC’s authority, they have hit upon a portrayal that has drawn blood – the accusation that the ICC targets Africa almost exclusively.

The list of investigations is almost exclusively African – the Central African Republic, Mali, Cote d’Ivoire, Libya, Kenya, Sudan, Uganda. Outside Africa, only Georgia makes the list. In Europe, school children, reports have pointed out, do not know what the ICC is – but their peers across Africa learn that it is anti-African.

The counter-argument put by Amnesty International, that ‘for many Africans the ICC presents the only avenue for justice for the crimes they have suffered’, has little political traction.

The ICC’s Kaba will be waiting nervously on notices from other African signatories.

This is an undeniable low point for the ICC, and it is South Africa’s withdrawal that has done most damage. The stress placed on the rule of law by lawyer Nelson Mandela’s commitment to constitutionalism in the 1990s has already suffered under president Jacob Zuma. On many counts, South Africa is a legal bright spot that is visibly fading.

But it is highly unlikely that this is the end for the ICC, for several reasons.

The first is institutional resilience. ICC staff include many who transferred from the ICTY as the latter’s work wound down, and in some cases they personally saw low points for the ICTY. There were times when ICTY indictees lived openly and operated freely. A change in political will altered that.

Perhaps oddly, an even more compelling reason the ICC is unlikely to crumble is poor diplomatic relations among key international powers. The result of such tension, even though the US and Russia are not ICC signatories, is customarily stasis for international bodies. Undoing the ICC would require consensus and cooperation that simply do not exist. And even its three guilty verdicts have helped entrench its jurisprudence.

The ICC is part of the international architecture. It is here to stay and will find that it can wait out its current problems. By any count though, it has been a bad few weeks for a body that had become accustomed to adding, rather than subtracting, signatories.