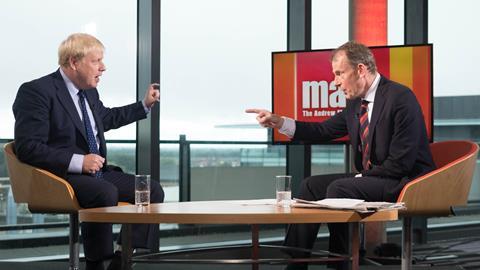 The prime minister has hinted that a US-style vetting process could be introduced for Supreme Court appointments after calling last week's ruling that he unlawfully suspended parliament 'novel and peculiar'.

In an interview with the Sunday Telegraph, Boris Johnson said that if judges were to pronounce on political questions as the UK's highest court had done last week, 'then there is at least an argument that there should be some form of accountability. The lessons of America are relevant.'

Appearing on the BBC's Andrew Marr Show yesterday, Johnson said he thought the judgment was 'certainly novel' and raised 'very interesting constitutional questions, and those need to be thought through over quite a long time.'

Asked if a new constitutional settlement is needed, Johnson said: 'I think that the judgment by the 11 justices was certainly novel and peculiar in the sense that they went against the master of the rolls, the lord chief justice, in extending the remit of the court into what I think was obviously a political question. The consequences of that decision are going to be working their way through for quite some time. You are now already starting to see as it were a backlash or people questioning the implications of that decision.'

Attorney general Geoffrey Cox suggested last week that Supreme Court justices may have to be approved by politicians, despite telling MPs that he firmly supported the independence of the judiciary.

He said: 'As we leave the European Union, a great gap opens up, whereby we take away from legal integration all this European Union law, and we need to think about the implications. I therefore agree that there may very well need to be parliamentary scrutiny of judicial appointments in some manner. I have to say that I am not enthusiastic about that.'

In the US, Supreme Court justices, and judges in the federal court of appeal and district courts are nominated by the president and confirmed by the senate, as required by the constitution.