We will not be silenced: Liam Allan joined by protesters outside RCJ 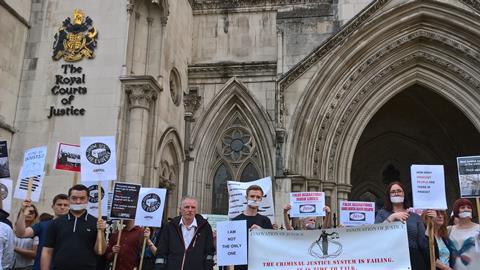 Justice campaigners have vowed to speak out about the failures of the criminal justice system in a symbolic vigil outside London's Royal Courts of Justice.

As City workers began heading home yesterday evening, Liam Allan and Annie Brodie-Akers, founders of Innovation of Justice, stood outside the landmark, taped their mouths shut and held up a banner stating: 'The criminal justice is failing. It is time to talk.' They were joined by those who have been caught up in the criminal justice system, such as Eddie Gilfoyle, and family and friends, who were also holding banners.

Brodie-Akers, a paralegal, told the vigil that the criminal justice system 'is supposed to give justice to those who need it most. Victims are being failed and we are being failed. We have people talking for us today who have been in prison. People who escaped prison but cannot forget about it. False allegations and wrongful convictions kill and need to stop. We cannot be ignored any longer. The time has come for change.'

A rape trial involving Allan was abandoned following the discovery of crucial text message evidence that had not been disclosed to the defence. Allan received an apology from the police and Crown Prosecution Service last year.

Allan, a criminology and criminal psychology graduate, told the vigil: 'I am here today because the system failed me - no two ways around it... There are people out there thinking it's not going to happen. I was one of those people. I wandered around, thinking everything was great... I had not had a fight in school. Somehow I was inside a jail cell accused of one of the most monstrous crimes.

'I nearly lost my life nearly a quarter of the way into it. I nearly took it, they were going to take it. I cried myself to sleep because of the things that were happening. No one was fighting for me. I promise you now I will listen. I will be around for the people who cannot be here today, who cannot talk out. We will win this fight.'

After hearing other campaigners' stories, Allan drew the vigil to a close, telling campaigners the fight would continue with more events to represent loved ones who were unable to stand with them. 'I am Liam Allan and I'm not the only one. We are not alone,' he said.

The negative publicity that followed Allan's case prompted the police and Crown Prosecution Service to come up with a National Improvement Disclosure Plan. However, there was widespread outrage this year when they announced that they had introduced standardised consent forms to allow access to digital devices.