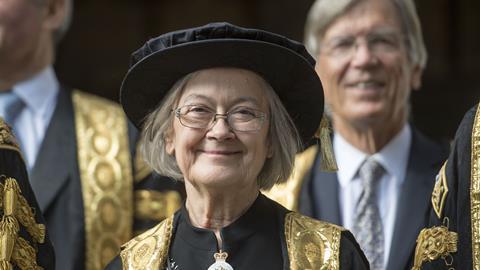 Retirement often means a cruise around the Med or perhaps attacking that garden you never got around to tending.

Lady Hale, on the other hand, appears to be busier than ever. Since moving on last month from the Supreme Court, she’s made so many public appearances Obiter is starting to wonder whether there’s more than one of her.

Hale has (deep breath) spoken to the Yorkshire Post about the difficulties of charging suspected rapists; criticised City firms in the London Standard for making women wear high heels; presented graduates at the Legal Education Foundation with their certificates; appeared in a Q&A at the University of Chichester; been interviewed for the BBC Radio 4 series One to One; and spoken at New College, Oxford, as part of its 40th anniversary celebrations. Among much else.

Alas, the one place she didn’t pop up was at the Modern Law Awards earlier this month in Manchester. The packed room full of legal sector luminaries was momentarily silenced as Hale’s name was read aloud as the recipient of the 2020 lifetime achievement award.

‘Is she actually here?’ asked one incredulous audience member, giddy with excitement. Alas, she was not. Instead an old friend was sent in her place to pick up the gong. Only so many hours in the day, after all.