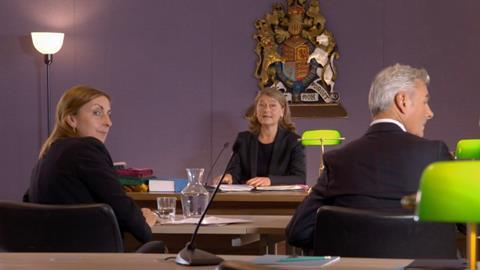 EastEnders remembers the court drama but forgets the realism

Obiter must admit to being a lapsed EastEnders viewer. We haven’t watched the TV soap since Janine was scheming against her enemies and Phil and Sharon were involved in a blazing row.

Fortunately, those things are still happening, proving that in the spirit of a greener future, there are none so good at recycling as television producers.

We watched on Tuesday after being alerted by friends to a particularly egregious example of the bad portrayal of the law, as Janine sought access to her daughter (who curiously looks nothing like her, but we digress).

The scenes from the ‘family court’ (well done on getting a hearing date by the way) were indeed as bad as we had been promised. Janine and her adversary Kat Slater engaged in a heated debate in the courtroom, during which their solicitors sat back and watched (pictured above), while the little girl walked in on proceedings to be promptly told she had a half brother she had not known about. It was a complete free-for-all.

The judge, who had said nothing throughout, adjourned proceedings with no directions and seemed bemused by the whole thing. The exchange was more suited to the Queen Vic than the family court and it’s fair to say that – aside from the setting – there was nothing realistic about the whole scene.

As one tweet pointed out, if this is what programmer makers believe family hearings are like, then the opening up of family courts cannot come too soon.

Still, at least family lawyers weren’t alone. The same episode featured the Mitchell family lawyer Gray receiving payment in a brown envelope for some shady services. He can surely expect a call from the SRA.