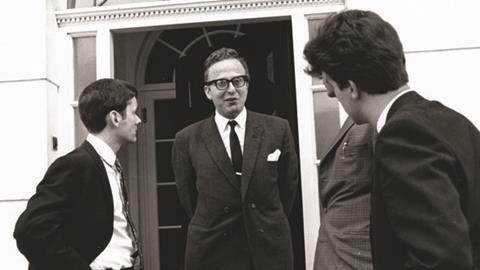 Few embark on a second career as a disputatious newspaper columnist long past retirement age. One solicitor who did so is Liverpool legal legend Rex ‘Makin His Point’ Makin, who died last week aged 91.

The veteran lawyer’s passing was lamented by the Liverpool Echo, which featured some of the highlights of a weekly column that Rex began at the age of 68 and continued for over two decades.

Rex set out to ‘prick the bubbles’ of the mighty – and he did not disappoint. Many a local worthy suffered the sharp prick of his nib, including Derek ‘Degsy’ Hatton (remember him?) and dour and doughty Liverpool FC enforcer (and later manager) Graeme Souness.

Makin’s first column, headlined ‘My little list of failures’, set a combative tone that he was not to relinquish.

‘I love Liverpool and its people’, this ‘wise, waspish workaholic’ told the paper – and indeed there was barely a Scouse celebrity who did not cross his path. Anne Robinson, Carla Lane, Freddie Starr, Jimmy Tarbuck, Bill Shankly and (at one remove) Brian Epstein all ranked among his clients and contacts. Makin is even reputed to have coined the word ‘Beatlemania’ (Rex is pictured in 1967, on Epstein’s doorstep).