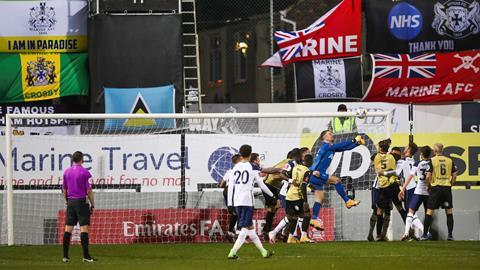 Crosby firm Black Norman Solicitors scored what could be one of the biggest marketing coups of the year thanks to its support for local football club, Marine AFC.

Millions of BBC viewers tuned in last Sunday to watch eighth-tier Marine play Premier League side Tottenham Hotspur in the third round of the FA Cup – where they will also have seen Black Norman Solicitors’ advertising board in the stands.

Solicitor Richard Entwistle, a director at the firm, said: ‘BBC One, against Spurs – how can you beat that? Both teams put out very convincing sides and for the first 20 minutes or so it was really quite exciting.’

Sadly, Marine lost 5-0. But they won the hearts of viewers. And Black Norman Solicitors won marketing exposure that other law firms could only dream about.