Only Connect mistake has family lawyers shouting at the TV 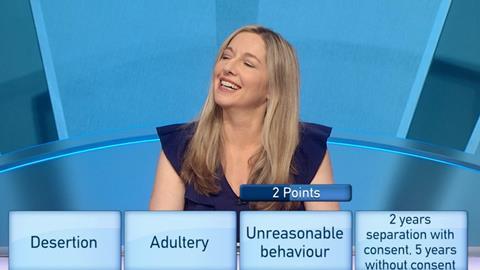 ‘Grounds for divorce’, said the Godyn family after being shown three out of four clues: desertion, adultery and unreasonable behaviour. ‘Is the right answer,’ replied Coren Mitchell.

Lumb wasn’t the only one to shout at the telly, it appears:

I was watching whilst drafting Replies on a divorce bill so I WAS SHOUTING!

The exchange caught the attention of Coren Mitchell, who replied:

The clues are all still in a connected group though, right? The question works, it’s just that the caption should’ve been worded differently? @OnlyConnectQuiz@QuizQuizQuiz

Lumb agreed: 'Exactly. Pedantry perhaps but guaranteed to stir the lawyers on Twitter into indignant action.'

But sorry for that misleading shorthand; should have been put differently.

The fourth clue, in case you were wondering, was '2 years separation with consent, 5 years without consent'. Nonetheless, the show may want to give family law a miss in the next episode, just to be on the safe side.