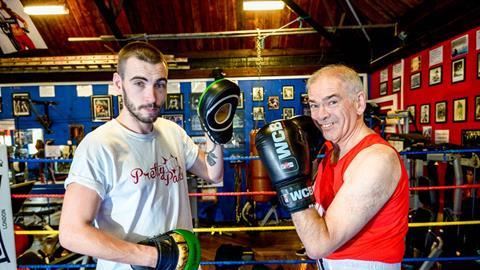 As the fastest-growing corporate sport in the country, it’s not unusual for a press release about white-collar boxing to land in the Obiter inbox.

But rarely do we come across a solicitor who gives it a go in the ring at the age of 63.

Phil Costigan, a commercial property lawyer at Coventry firm Band Hatton Button, had already been training for three years when he decided it was time for a real fight.

In front of 2,000 punters at the Ultra White Collar Boxing event at Stoneleigh Park, Warwickshire, Costigan took on a man 30 years his junior over three two-minute rounds.

The two fighters went all the way and ended up in a draw, with Costigan raising £700 for Cancer Research UK.

Costigan said: ‘When I first saw my opponent on the day I began to wonder what I had let myself in for, so I was dead chuffed with the result.

‘We were well-matched and it was a fantastic, adrenalin-fuelled experience that I wouldn’t have missed for the world. We both ended up in the bar afterwards having a drink together.’

The senior partner went through eight weeks of intensive training to be ready for the fight, helped by his trainer Warren ‘Pretty Pads’ Glenn (pictured, left).

‘I’d definitely recommend giving it a go as it’s a win-win for everybody who takes part, while the training gets you into shape and you get to make a difference to a great cause,’ he added.