Obiter is convinced that the natural symbiosis 'twixt art and the law remains untapped, and to that end spends time in gallery spaces drinking champagne with lawyers.

Last week was a case in point – Bristol firm Burges Salmon was in residence at the National Gallery; London’s Wedlake Bell, sponsor of the Chelsea Art Society’s exhibition, handed out the firm’s ‘Award for a Young Artist’; and invites arrived for the Herbert Smith Freehills & Artiq art prize.

Most exciting though is the idea of the lawyer-artist. And so to Mayfair gallery D-Contemporary and the solo exhibition of notary David Fawcett. ‘Observations of a London commuter’ (David lives in Tunbridge Wells) fills two floors of 23 Grafton Street, London.

Each is a story in acrylic on canvas. ‘Telling my boss a few home truths’, shows the backs of two men stood at neighbouring urinals; ‘Taking no interest in Maureen’s wedding photos,’ depicts an open plan office with grouped desks – one figure failing to join a huddle of colleagues; ‘Two passengers listening to Status Quo,’ pictures an annoyed commuter sitting next to another wearing headphones (already sold).

Is there a market for lawyer art? It would seem so – wit and colouring have ensured six sales so far, and the gallery assistant told Obiter most would go at the private view. The real test of the market perhaps will be the fate of ‘Working from home’ – a tubby naked man, at his kitchen table with briefcase, mug of tea and laptop. 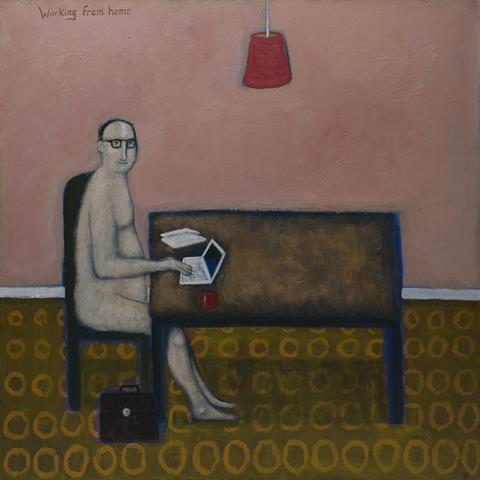