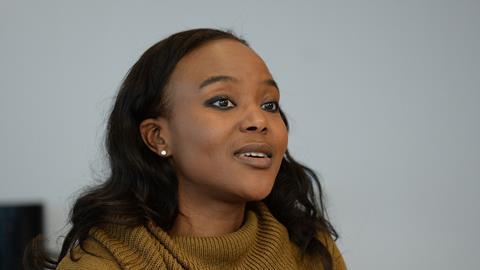 Roche’s award-winning general counsel for the UK and Ireland talks to Eduardo Reyes about bioscience, leadership and confounding expectations.

Before writing up my notes from an interview with Funke Abimbola, I print off her LinkedIn profile.

Stretching to 22 pages, it is on the lengthy side. But then, there is a lot to fit in. As well as the ‘day job’ at the pharmaceutical business of Roche, we can read of the languages, governance positions, charity work, ‘patronage’ of various causes, work promoting diversity in the legal profession, network memberships and awards. And, of course, that she is a ‘proud mother’.

In fact, pretty much the only thing that makes me hesitate in reaching for the label ‘member of the great and good’ is that Abimbola has achieved wide recognition and prominence while still mid-career.

Yet, as Roche’s general counsel and company secretary for the UK and Ireland recalls, getting her legal career off the ground was not straightforward. ‘I’m a rebel,’ she says.‘I decided not to become a doctor – my mum and dad are doctors, my three younger siblings are doctors. I loved the science, but not the blood and pain. It wasn’t going to happen.’

After graduating in law from Newcastle University, Abimbola took a holiday in Nigeria which, for family reasons, turned into a stay of almost three years. ‘In the mid-90s,’ she says, ‘it was very difficult to get a training contract in the UK, so I did the Nigerian Bar exams. I passed and also did work experience at a leading Nigerian law firm.’

On her return, following spells at Wembley plc (immediately following the sale of the stadium) and Memery Crystal, she converted to qualify as a solicitor at Campbell Hooper (now Charles Russell Speechlys).

Her experience at Wembley was a ‘great opportunity’, she says, especially for a future in-house lawyer already in close proximity to business decisions. ‘I sat next to the chief executive’s office and worked closely with the board – it was an incredible experience.’

Then, while at Campbell Hooper, she became a parent. ‘I had my son, came back, and it was a whole different world. No one in the City seemed to have had a baby at 28!’ Abimbola observes. ‘I had no concept of what it was like to return and do the sort of hours expected.’

She asked to work flexibly, but also ‘made a conscious decision that I could get a better balance in the regions’. This led her to IBB Solicitors, west London and Buckinghamshire, which, with a largely SME client base, meant yet more direct and ongoing contact with business-owners.

Again, although these were smaller businesses, the experience was ideal preparation for an in-house role. That was when Abimbola joined Roche, initially as managing counsel UK and Ireland leading a team of commercial lawyers. She later took on additional responsibility for leading a cross-functional team on a market access project. In a roundabout way this brought her back to the family calling – medicine. She has, she notes, ‘a passion for life sciences’, adding: ‘Roche was familiar to me from my father, who had a legacy of working with the company in Nigeria. I was, therefore, very familiar with its product portfolio.’

First, though, she ‘had to establish the role, as it was newly created. Incredibly, it hadn’t previously existed.

‘I had to look at how the team was perceived. We did a perceptions audit using a PR company I brought in. I needed to know where we were starting from. Many colleagues did not know where we were physically, sitting in such a large site, or where we fitted into the company’s work and strategy.’

That was in 2012. Within a short time, more research showed the legal team had raised its profile significantly, not least by such steps as ‘adding value through training face to face and online’.

Roche’s own products, notably in the field of targeted cancer treatments, lead in their chosen markets. Industry gongs – including awards from the Financial Times and Halsbury – improved the legal team’s own profile both internally and in other life sciences companies, she adds.

Roche operates in a tightly regulated industry and the role played by the (comparatively lean) legal team is core to what it does. Abimbola is company secretary for the Roche unit that holds the marketing authorisations for centrally registered medicinal products. She has a pan-European remit, dealing not only with the UK’s Medicines and Healthcare Products Regulatory Agency but also the European Medicines Agency and other national watchdogs. Also key is adherence to the code of practice for the pharmaceutical industry, the ABPI (Association of the British Pharmaceutical Industry) Code.

KNOWN FOR diversity and social mobility champion; winner of awards including in-house team of the year and Halsbury and Legal Business magazine accolades; named in ‘GC Powerlist’

This must be strictly adhered to. A serious code breach ‘can lose you your job’ she comments: ‘We take compliance very seriously within the organisation’.

Of particular importance is Abimbola’s role in overseeing challenges to decisions by the UK’s National Institute for Health and Care Excellence (NICE). Through its evidence-based guidance, NICE has an important role in determining whether the NHS deems a treatment to be, on balance, worth the cost – thus determining market access for a business like Roche.

‘With oncology products, market access is a real issue,’ she says. ‘The Cancer Drugs Fund (the special fund for cancer treatments) ceased earlier this year and the funding of cancer treatments in the UK remains under review.’

The in-tray’s contents have changed in other ways since Abimbola joined Roche. ‘By far the biggest [items] used to be clinical trials and late-stage trial failures,’ she reflects; whereas now she is looking at ‘new disease areas’, including treatments for MS and asthma.

Now sitting client-side, Abimbola has clear observations to make about peers in private practice. The City, she thinks, need not be such an unaccommodating place to work, but changing that will require partners to be more organised when it comes to matter management.

‘With the exception of a very small number of deals – coming at financial year-end, and for tax reasons, or listing and fundraising – partners were not good at managing client expectations,’ she observes.

In a context where ‘there’s an oversupply of firms that can do the work’, she adds, ‘there’s a competitive-edge thing – a feeling that if we over-deliver, that’s where our edge comes from’. The alternative of ‘managing client expectations’ and seeking other sources of differentiation ‘isn’t in the picture’.

A better way for firms to differentiate themselves to win work is to demonstrate a ‘cultural fit’ with the client. At Roche, that includes a commitment to diversity.

While Abimbola will check a firm’s ranking in guides like the Legal 500 and Chambers, she says: ‘Technical expertise is a given, it is not a USP. It is crucial they understand our business.’

A similar imperative applies to the in-house legal team. With 1,000 of the 1,800 staff at Roche’s Hertfordshire base working on clinical studies, that means being a good fit with scientists and other non-lawyers. ‘With scientists and commercial colleagues, you have to invest time in understanding where they’re coming from,’ Abimbola notes. ‘You really have to understand what the issue is that they need help with. What is their priority… and strategically how [the legal needs] fit with some of the science and commercial considerations behind it. Demonstrating that understanding is what will get you “brownie points” with your colleagues.’

A law firm’s commitment to diversity and inclusion has ‘a significant weighting’ in panel selection, she notes, adding: ‘There are examples of firms who didn’t make the shortlist because they didn’t share our values. Roche as an organisation is very strong on diversity, with 31 nationalities working here in Welwyn and more female than male leaders.’

Here, the oversupply she witnessed in the City is very much in her favour as a client: ‘We have the luxury of so many suppliers in the life sciences field.’

Nevertheless, as her extensive list of diversity-related commitments shows, Abimbola is not expecting law firms to do all the ‘heavy lifting’ in this regard. To take a few items from a long list, she is: a ‘professional ambassador’ for Aspiring Solicitors, a group that encourages people from under-represented groups to join the profession, providing support and information; a champion for Women in Law project First 100 Years; a patron of the Asian Voice Charity Awards; a steering committee member of civil rights and social action group DRIVE (Diversity Recruitment Institute for Value and Excellence); founder of Women Leaders in Life Sciences Law; and a regular media commentator on diversity issues.

She also speaks to and provides tips to pupil groups at secondary schools, which extends to follow-on mentoring for some. To succeed, she stresses, pupils must ‘always be aware there are days when everything you do goes right and days when everything goes wrong. So you need to be resilient’.

Perhaps that ‘outreach’ work is not so very far from the way she views the role of leadership in a well-run business. As Abimbola reflects in closing: ‘Being a leader is all about influence and making sure you’re all working towards a common goal.’