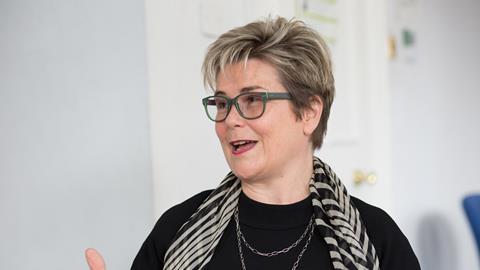 Deborah Grimason, general counsel at builders’ merchant Travis Perkins, tells the Gazette that its panel of external law firm advisers must collaborate and share knowledge for the benefit of the business – or not work with the company at all.

She says: ‘I have no patience with the attitude of some external advisers that this is their intellectual property and they’re not going to spread it around among competitors.’

Grimason is uncompromising in her dealings with the panel of four external law firms that Travis Perkins retains. ‘They need to understand our business,’ she says. ‘The days are long gone when you can simply wine and dine your client and see your bottom line suddenly enhanced. We expect to build a trusted relationship with external lawyers. They need to know my in-house team and almost become a part of it.’

Grimason joined Travis Perkins, a company with an ambitious five-year plan to double turnover from £5bn to £10bn, as general counsel and company secretary in early 2014. She now heads a 28-strong team looking after legal services, discipline, share scheme administration, group insurance, debt collection, claims handling, property law and pensions. During a career spanning a quarter of a century, she was previously at Lafarge Tarmac for seven years and, before that, worked at such high-profile organisations as Royal Mail, BOC Group, the British Coal Corporation and Nokia.

A builders’ merchant, Royal Mail and a Finnish multinational telecommunications company – diverse organisations and diverse products. Is it not back to square one on changing business sector as an in-house lawyer? She replies: ‘There is a commonality because the legal issues you face at each business are much the same. There will always be indemnity caps on liabilities, for example, and property portfolios and employment contracts. But it is still essential as an in-house lawyer to get to know the individual business inside out and to speak its language.’

Has she ever been tempted to work in private practice? ‘The one hiccup in my in-house career was the five years [1989-94] I spent at [City firm] Nabarro,’ says Grimason. ‘And even there I was essentially continuing the work I’d previously been doing in-house for British Coal.’

Grimason adds: ‘The best in-house lawyers have to have a real interest in the business. We play a central role in helping the business go out there and sell products or services to make a profit. We say “yes” to new initiatives and then work out a way to do it. We are not the sales prevention squad, the external corporate lawyers, who feel their role is primarily regulatory and who  advise the business how to keep within certain guidelines.’

Do all CEOs share this vision of the GC’s central importance to their businesses? ‘Sadly, no,’ she says. ‘Resistance to our role comes primarily from a lack of knowledge of what we can bring to the table. Many people think of lawyers as providers of just conveyancing, wills and divorces. They don’t think of us in a business context at all, whereas most in-house lawyers have had wide exposure to business processes and crises, and have excellent problem-solving skills.’

To organise her 28-lawyer team Grimason has a leadership team of six lawyers, comprising four senior commercial corporate lawyers who lead and mentor their own teams, the deputy company secretary and the head of property law. ‘We used to be a fragmented team,’ she says. ‘But each of Travis Perkins’ four divisions is now headed by a CEO and we assign a senior lawyer from the leadership team to each one of them.’

And what precisely does the leadership team do? Grimason answers with an enthusiasm implying that this is a question she wanted asked. ‘We strive to become genuine business partners by developing both our staff and ourselves to be more than just lawyers. Our vision is to become trusted advisers to the four divisions, which are quite autonomous because they have grown by acquisition rather than organic growth. We strive to sit at the management table and be part of the management of each division – that is to say, to be part of the business leadership team as well as the legal team.’

These four divisions are General Merchanting, which is the Travis Perkins group’s core business of supplying products to professional tradespeople for repair, maintenance, improvement, new build and construction projects; Plumbing & Heating, which supplies products from around 500 outlets countrywide; Contracts, which supplies the civil engineering, construction and pipeline industries; and Consumer, which supplies domestic building and decorative materials through retail stores, such as household name Wickes.

Grimason returns to describing her ambitions for the leadership team. ‘It is a journey that doesn’t happen overnight,’ she says. ‘Some colleagues have been reticent about the lawyers’ integration into their divisions, others have been more open. But to be a fully functioning in-house lawyer, my lawyers need a voice. They don’t deserve to be at the table without an opinion worth listening to. It is the leadership team’s duty to help them be the best they can be. Unless they are doing something they enjoy and are passionate about, then what is the point of them being there?’

Private practice has seen a growing commoditisation of legal services. Have in-house lawyers seen the same? ‘You have to adapt or die,’ responds Grimason. ‘The leadership team has been discussing a software program that essentially writes contracts in just minutes. The day of the lawyer sitting behind a desk churning out contracts is almost gone. The in-house team has to justify its cost to senior management. A whole raft of low-level stuff is likely to become automated, saving money and helping prove our value to the enterprise.

‘I would feel completely lost without technology,’ she reflects. ‘Technology has made all our lives easier. When I was at Nokia, all I needed to be effective was a laptop and a phone. Business and individuals have a massive reliance on technology, but the backlash has begun and people are starting to search for silence.’

A challenge for all at Travis Perkins is the business’s five-year plan, called TP2018, to grow annual turnover from £5bn to £10bn. The economy is well out of recession, but is doubling turnover in so short a timeframe remotely practicable? ‘It is an aggressive plan, but one that we think we can meet,’ she notes. ‘Travis Perkins is an entrepreneurial company with a can-do attitude. We move fast when decision-making.’

TP2018 is, she explains, ‘a multi-channel strategy of adapting to the needs of our customers, whether they are merchants, tradespeople or consumers.

‘We are modernising the business to reflect needs that we have identified through customer feedback, whether that is next day delivery, click and collect for the DIY trade, or simply arriving in your white van and loading up. We are also upgrading our branches. We are a relationship business and our customers want to go into a branch, have a cup of tea, discuss what they want with staff and then order their goods.’

The interview turns to the notorious ‘cycles’ that have blighted some in-house careers, where businesses have bulked up their legal teams with new hires and then downsized them at a new CEO’s whim or when sales threaten to drop. Grimason says she has seen many ‘cycles’ since training [1987-89] in-house with British Coal’s legal department of 130 lawyers. ‘Why train in-house? Because I was earning £9,000 a year while others were doing articles for free,’ she says.

Is Grimason optimistic that she won’t soon see another cycle of legal team growth and shrinkage? ‘A business’s legal team, along with training, is one of the first areas to be cut when times are hard,’ she responds.

‘As Travis Perkins’ GC, I have done a study into how we can be more viable and, although still an overhead, add value to the business. I concluded that providing that the GC and his or her team are commercially minded, we can indeed become a valued part of the business team, rather than a mere adviser. Having said that, we still have a long way to go in this country before the GC role is as highly valued as it is in the US. We still need to be really accepted at the table as a counsellor, rather than just head of legal.’

An English literature and philosophy graduate from Stirling University, was Grimason always headed for law? Not necessarily, she reflects in closing: ‘I also read for a post-graduate qualification in forensic science. I’m particularly interested in blood splatter marks.’