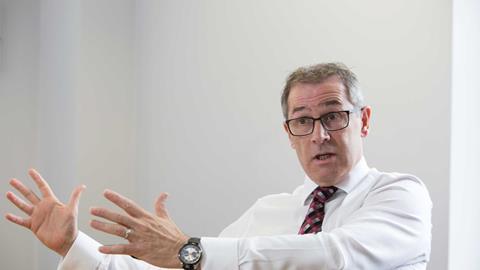 Gavin Tyler, managing partner of Kent firm Cripps, seeks out piles of paper on office floors and then ‘deliberately trips over them’, he tells the Gazette. Eccentric behaviour, some might say, for the boss of a 48-partner firm. Or is it simply the action of a man whose management style is to show rather than tell? ‘I’m a great fan of the paperless office,’ he says. ‘We have computers, so bin the paperwork as soon as the transaction is done.’

His management style mirrors the firm’s ‘core value of openness’, he says. ‘We don’t do politics and we are open about people’s billing information. Everyone can see how everyone else and the firm are doing. We are transparent about the firm-wide bonus scheme, too. Fee-earners are entitled to 20% of the profit they make above their billing target. Last year we paid out £940,000.’

Tyler also publishes a weekly blog on the firm’s intranet, which is widely read. ‘It’s important to talk to one another, to be open. A secretary recently called me and asked for a chat, which I readily agreed to. But I’m not a soft touch. I have to make the tough calls – and I’ve made them.’

He is down to earth about leadership. ‘The leader doesn’t have to be right, but he does have to be clear where he is going and what he wants to do,’ Tyler says. ‘Managing partner is a serious job because a lot of people are depending upon the firm being successful. Managing partner and, indeed, senior partner can be lonely places. I am glad there are two of us.’

Tyler discovered that he ‘loves managing people’ in 2005, when he assumed responsibility for the corporate and employment law side of the practice, which also provides property, private client, family, tax and other services. On 1 May 2013, he took over management of the entire firm, with its 310 lawyers and other staff spread across offices in Kent and London. His predecessor had been in the role for 23 years, but Tyler is not intimidated by the challenge.

‘The secret is to hire excellence,’ he says.

‘The danger with lawyers running law firms is they think like lawyers when they should think like business people. So you need to hire excellence in IT, human resources, finance, business development, facilities and other areas essential for running a successful business. These people bring new ways of thinking to the firm. We have recognised their value by opening up a career structure for non-lawyers. Some of them are partner level, for example. Successful management is surrounding yourself with people who are better than you.’

It has been a 30-year journey for Tyler at Cripps (a journey second in length only to that of a member of the administration team, who has been there 50 years without a day’s sick leave). Tyler trained at Cripps, qualifying in 1986 at the Tunbridge Wells office that the firm had occupied since its founding in 1852 (and has long since vacated). ‘It was a very different firm when I joined it,’ he recalls. ‘Everyone was either Oxbridge or a street fighter.’

He went on to become a partner in 1990 and today is managing a firm with four offices in Kent – two in Tunbridge Wells, and one each in Kings Hill and Sandwich – and a fifth in London. ‘We currently take up 17 floors in five buildings,’ says Tyler. ‘That’s 17 mini-cultures.’

Property rationalisation is on hand, however. Towards the end of 2016, the firm is to move to new purpose-built offices on the site of the now demolished Kent & Sussex Hospital in Tunbridge Wells. Tyler, who, unlike some managing partners, refuses to be ‘locked away’ in his office, talked to colleagues about what they would like to see in the new premises. ‘Did they want a cell each or open plan?’ Tyler asked. ‘It is important to get it right. Offices determine culture, behaviour and the sort of person who comes to work with you. A move also re-energises the firm.’

In contrast to the present offices, ‘there is going to be a communal breakout area where all staff can congregate and collaborate outside their silos,’ Tyler says. ‘I was even considering ruling out eating at desks, but that is maybe too prescriptive.’

What other major projects has he handled? ‘There was last year’s [September 2013] merger with seven-partner Kent firm Vertex Law,’ he replies. ‘It allowed us to double the size of our corporate and commercial practices, which has made us more attractive to corporations. So far, two plus two has made five – the merger has been a success. Two partners who used to be based here in Royal Tunbridge Wells have now relocated to what used to be Vertex’s Kings Hill offices.’

Amanda Chapman has also joined the firm. Formerly a partner at City firm Manches, which went into administration in November 2013, she specialises in tax, estate, trust and succession planning for UK and international individuals and families.

Most recently, Christina Blacklaws, the former director of policy at Co-operative Legal Services, joined Cripps as director of client services. Tyler says: ‘Her role is to look at our visibility, standard of service, opportunities and productivity. We want to get better at what we do and be the modern firm that we say we are. She understands what consumers want, from a bill for just £50 to the management of a big trust. Some 75% of our people are women and Christina Blacklaws is the Law Society council member for the Women Lawyers Division, which has to be a bonus.’

He adds that the firm is about to embark on its first advertising campaign to raise brand awareness and to prospect for new clients. ‘Some 40% of our work is for clients with a London postcode,’ he says. ‘We are doing increasing volumes of international work, too, advising overseas clients who recognise they are better off doing transactions under England and Wales law.

‘The advertising campaign, however, is going to appear in local media, online, at local railway stations, and in places such as the Royal Victoria Place [Tunbridge Wells] and Bluewater [Greenhithe] shopping centres in Kent. It will be aimed at private wealth and private capital, and at people engaged professionally in business or who are business owners. In the past, Cripps has been reticent about talking about itself. That’s about to change.’

Tyler tells the Gazette that he is to be away from the office and incommunicado from 1 September for six weeks on sabbatical leave. Around 70 people at the firm are eligible for the sabbatical scheme, which sets a timetabling challenge equal, he says, to that faced by schoolteachers planning a year’s lessons in different disciplines and across different departments. He describes the advantages of so generous a scheme to the firm and individual practitioners.

‘It enables the firm to observe a senior person’s team without its leader,’ he replies. ‘It lets us identify prospective leaders, the person with the initiative to step up to a more responsible role. Clients are also able to build relationships with members of the team other than the senior person. It is a good tool for risk management, too. Not even email contact is allowed during the sabbatical, so if there are any risks, they will emerge.’ He pauses: ‘It reminds you that you aren’t indispensable.’

And the benefits of the scheme to individuals? ‘One week is just a short rest and two weeks is a short holiday. Six weeks allows you to get work out of your system and begin to think about the big picture. It’s an opportunity to do something different. And actually, if you’ve got the right team in place, there’s no need to read emails while you’re on holiday.’

What are Tyler’s plans for the future of the firm? ‘We are going to continue developing our brand as a modern law firm, with a dynamic, forward-looking culture [the firm was rebranded in June from Cripps Harries Hall to Cripps]’, he responds.

‘We expect to make more lateral hires to strengthen our offering. And we will continue to be open with clients and colleagues alike. We genuinely don’t do politics at Cripps.’

Gavin, in self-imposed purdah during a six-week sabbatical break, has probably not yet heard the good news that his firm’s private client team has scooped a prestigious prize.

At a Society of Trust and Estate Practitioners award ceremony on 17 September, attended by 700 private client professionals, the Cripps contingent was named Legal Team of the Year (midsize).

Myles McIntosh, who heads Cripps’ 90-strong private client division, commented: ‘The judges put our success down to two factors. The first was the way the private client team works hand-in-hand with our corporate and property practices to provide a broader service to our entrepreneurial clients. These individuals may, for instance, want to buy or sell a business, or pass shares in a business down to their family.

‘They need advice on how their plans may impact upon not only themselves, but also their spouses and children. Our combined team can help with tax and estate planning, the sale or purchase of properties associated with the business, and all other aspects of the transaction.

‘The second factor that caught the judges’ eyes was our close focus on client service. We put great stock in getting feedback from clients and looking at ways to improve our service to them. We seek feedback on everything: speed, friendliness, approachability, contact with secretaries. All this is absolutely key to the Cripps ethos: It is all about the client.’