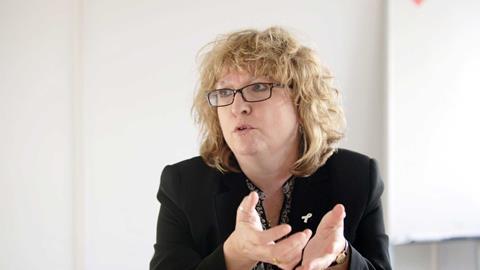 Cris McCurley has devoted her career to helping some of the least visible and most vulnerable in society. She talks to the Gazette.

Slavery, women treated as chattels, forced marriages, child abduction, domestic violence, people-trafficking, sexual exploitation, honour killings. This litany of abuse characterises Law Society Excellence Award winner Cris McCurley’s caseload – and all of it set against a backdrop of legal aid cuts and access to justice denied to all but the affluent. It is a shameful snapshot of the underbelly of life in contemporary Britain, a scandal that McCurley has dedicated her career to countering.

She has travelled the world – India, Cambodia, Vietnam, Bangladesh – to advise women’s projects, review the effectiveness of domestic violence legislation and promote the UN’s convention to eliminate all forms of discrimination against women (CEDAW). She has also helped train frontline professionals on forced marriage and other related black and minority ethnic (BME) issues.

McCurley has provided written evidence to parliament’s Home Affairs Select Committee on how to tackle violence towards women and girls, and is a member of numerous advisory groups and professional panels, including the Family Justice Council Private Law Committee, and the International Federation of Women Lawyers.

She is co-chair of the women’s BME Domestic Violence Network. She advised the Ministry of Justice on the Forced Marriage (Civil Protection) Act 2007 and is a guest university lecturer on human rights, forced marriage and honour-based violence. McCurley has also found time to advise parliamentary committees on the impact of the Legal Aid, Sentencing and Punishment of Offenders Act (LASPO) on access to justice for women.

How widespread, though, are the problems McCurley addresses? She says a tiny minority of women from the Indian sub-continent are effectively slaves in this country, hidden from public view, unable to speak English, often beaten, sometimes murdered. There is ‘an enormous gaping need’ for solicitors to apply their legal skills to rescuing these women from the discrimination that is rife in parts of their community, she says.

Leaving that community aside, women from all over the world are ‘trafficked’ into Britain, she says, duped by false promises of lucrative employment or marriage to men who promise them a comfortable life. Instead, once here, they are forced into prostitution or unpaid domestic service, frequently owing thousands of pounds to the very traffickers who are exploiting them.

But it is not only minority ethnic women who are in the line of fire. Women of all ethnicities are losing their rights ‘by stealth’, claims McCurley, as legal aid cuts implicit in, among other legislation, LASPO erode access to justice.

She cites the case of one client, an English mother trying to protect her child from a sexually abusive father, who took out a payday loan – at an extortionate interest rate – to meet her legal costs. Another mother turned to prostitution to fund her claim. People are ‘shocked and horrified’ by such tales, but where, she asks, is the outpouring of public outrage? ‘Everyone can see the necessity for the NHS because everybody expects to need “angel” nurses one day,’ she says. ‘Nurses are respected and treasured, unlike we “fat cat” legal aid lawyers.’

Returning to the plight of women from the Indian sub-continent who are living as slaves in their own homes, how can such a state of affairs arise in a democracy? McCurley explains that a ‘culture of disbelief’, while not encouraging this, allows it to happen. Most British people – the judiciary included – simply cannot believe that in our modern democracy there are women living in our towns, she says, with no key to the door, no money, no English language skills and no access to birth control. They might share a home with their husband’s extended family, but they are ‘bottom of the heap’, she adds.

They are first up in the morning, last to bed at night and spend their waking hours doing housework. They are without passports, prospect of escape and friends. And many suffer violent abuse at the hands of husbands and their relatives.

All this is happening in Britain, one of the first countries to abolish the slave trade more than 200 years ago, under the noses of a population with a proud history of respect for fundamental freedoms. The state authorities and the women’s neighbours, McCurley says, are reluctant to take action ‘through fear of appearing racist’.

It gets worse. Some of these women become victims of honour (or izzat) killings because they are deemed to have brought dishonour on their families. Dishonour in this context, McCurley explains, could mean they have left a violent husband or refused a forced or arranged marriage. Others may have gone against their family’s wishes by striving for, to use McCurley’s words, ‘self-actualisation’ – which is to say, achieving their full potential, which most citizens of this country take as their birthright.

How can such frankly murderous attitudes exist in the UK? ‘When people migrate, their values usually travel with them and are perpetuated if the migrants stay together as a close-knit community,’ she replies. ‘And so we see four- and five-year-old Asian children aware of izzat when they are still in the reception class at primary school. Izzat is like the weather, it is everywhere.’

She adds that one Pakistani man is on record as saying: ‘Our women carry our honour in their bodies.’ A 21-year-old British-born Pakistani defined the difference between men and women and their relative value: ‘Man is like a bar of gold, woman like a piece of silk. If they fall into the dirt, the gold can be wiped clean. The silk cannot and might as well be thrown away.’

By the time children are seven or eight, continues McCurley, they know that their parents are going to choose their spouse. ‘Many arranged marriages are successful and, anyway, it wasn’t so long ago that marriages were arranged in this country to secure farms and other assets within the family,’ she says.

‘I only deal with cases where something has gone wrong with an arranged marriage or where the marriage was not really arranged, but was forced upon the woman and she wants out.’ She adds that the Forced Marriage Act, which came into force in 2014, has now criminalised forced marriage. It has also clarified, she says, what constitutes forced marriage, with the result that many Asian women in their 20s or 30s have come to recognise that their ostensibly arranged marriages were in fact forced ones.

How did McCurley – born in Scotland, raised in England – become involved with helping exploited women from the other side of the world? After graduating with a law degree in 1984, she was unsure about entering the profession – it seemed ‘too middle class’, she says, for the daughter of a coal miner. For the next few years, she worked with various voluntary organisations in and around Newcastle, which was when she had her first contact with the local black women’s refuge. This group provides accommodation and counselling to black women fleeing domestic violence or servitude.

‘In 1987,’ McCurley continues, ‘I at last took my Law Society finals and then articles with David Grey Solicitors in Newcastle.’ She was to stay with the firm until 1998, rising from trainee to partner. She has since been a partner at two other local firms, including Ben Hoare Bell, which McCurley joined in 2006 ‘to do human rights work’.

The black women’s refuge has continued to refer cases. ‘I have learned so much from the incredible black and Asian women who run the refuge,’ she says. She has also had frequent contact with Karma Nirvana, a charity founded in 1993 with, according to its website: ‘One clear aim: to stop the scandal of forced marriage and honour-based violence. No apologies. No excuses.’ And, of course, she has lectured, mentored and travelled widely to spread the message.

‘The culture of disbelief is weakening as more people become aware of what is going on,’ McCurley says. ‘But so long as some communities continue to believe that women have no value and can be traded as chattels to settle disputes over land, for example, then the problem will persist.’

The Gazette returns to the subject of legal aid – or rather, its rapid erosion. McCurley says: ‘My clients, who typically have no income or family support, have been hit very hard by the cutting of legal aid in civil cases. This is a scandal. LASPO is neither CEDAW nor UN universal declaration of human rights-compliant. The proposal [subsequently defeated in the High Court] to impose a residence test on those eligible for legal aid is discriminatory and unlawful since it disadvantages the most vulnerable.’

She adds that the evidential requirements to prove domestic violence, which as a crime should automatically be eligible for legal aid, are also not compliant with CEDAW and the declaration. It excludes many women, she says, even where it is clear there has been violence committed or that there is an ongoing risk of violence.

She mentions several heart-rending cases, such as the case of a rape victim who had a child from her attacker, but subsequently was unable to meet the criteria for legal aid or welfare benefits. ‘We were going to judicially review the decision that she was ineligible and had even got as far as writing a letter before action,’ McCurley says. ‘How can it be that a victim of rape has the stark choice of heating her home or protecting her child? Which really is no choice at all?’