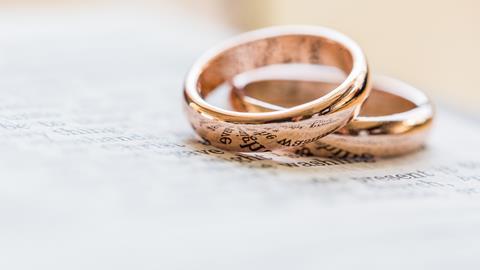 The law provides that a couple in England or Wales can be married by a superintendent registrar in a minimal ‘two-plus-two’ ceremony, in the presence of a registrar and two witnesses, for £127.

This represents the fees currently prescribed for giving notice (£35 each for UK citizens), the ceremony (£46), and a marriage certificate (£11). Meanwhile, the National Wedding Survey claims that the average cost of a UK wedding in 2019 was an eye-watering, Instagram-fuelled, £31,974.

One of the principles underlying the Law Commission’s current review of the law regarding weddings is ‘removing any unnecessary regulation, so as to increase the choice and lower the cost of wedding venues for couples’, so it is an opportune time to explore whether it really is possible to marry for £127.

Local authorities (LAs) in England and Wales have significant autonomy as to how they both provide registration services, and publicise wedding-related services on their websites. During November and December 2019, I explored 34 LAs’ websites – around 20% of the total – covering a representative mix of types of LA, and as wide a geographic area as possible. I timed my searches with a stopwatch, to investigate the ease of accessing information about two-plus-two ceremonies. At the extremes, I found comprehensive details on a single page of Hertfordshire’s website in 47 seconds, but it took me 13 minutes and 26 seconds to locate and electronically search the 36-page PDF that listed Anglesey’s fees for all its council-run services.

After 15 minutes’ searching, I could find no mention of a £46 ceremony on five LAs’ websites. Windsor and Maidenhead’s cheapest offering was £240 for the Ceremony Room, which seats the couple and 46 guests. This venue was subject to different terms and conditions from all the other wedding venues in that LA, reinforcing the sense that this was indeed its least expensive option. Bromley’s cheapest ceremony room, which seats 45 people, cost £220 for bookings on Monday–Thursday. Ealing’s council-run ceremonies have been relocated from the Town Hall, and the cheapest ones cost £171–£286, depending on the day and time. East Sussex’s cheapest advertised ceremony was £74, including ‘two statutory certificates and one commemorative certificate’. In Cheshire West and Chester, a two-plus-two ceremony and certificate cost £58, rather than the standard £57. I concluded that, if these LAs do offer £46 ceremonies, they are not keen for couples to find out about them.

There was a similar level of consistency regarding the need for, and cost of, giving notice of intention to marry. Where the price was stated, there were no deviations from £35 for UK citizens, though there was considerable variation in the clarity and prominence afforded to this information.

The websites of Cumbria, Oxfordshire, Swindon, and Walsall identified the notice fee as £35, but did not specify that this was per person. Swindon’s webpage stated that ‘each party of the marriage must give notice…’, and described the fee as being ‘for entering a notice’, but these two statements were separated by a section titled ‘Authority to marry’, so it was not immediately obvious that a couple must pay £70. Only St Helens’ and Sunderland’s websites expressly stated that the cost of notices is £70 per wedding. Ealing was unique in imposing ‘a non-refundable admin fee of £5 per person’ for giving notice. Anglesey, and Bradford and Keighley, mentioned a notice fee, but advised couples to contact the register office for details.

Some websites mentioned booking fees, and it was very difficult to ascertain definitive information about these. In many cases, they were identified as being deductible from the cost of the ceremony. The wording on nine websites, however, did not state or imply that booking fees or deposits were deductible from the ceremony fees, nor that they did not apply to two-plus-two ceremonies: in those cases, I have assumed that they are payable in addition to the ceremony fees.

My research indicated that couples can marry for £127, provided that both people are liable for only the £35 notice fee, in 20 LAs: Anglesey (assuming that the cost of notices is £70), Camden, Cardiff, Derbyshire, Herefordshire, Hertfordshire, Kensington and Chelsea, Manchester, Milton Keynes, Oxfordshire, Pembrokeshire, Peterborough, Powys, Somerset, Southend-on-Sea, Southwark, Sunderland, Swindon, Torbay, and Walsall. The minimum costs suggested by the other 14 LAs’ websites are shown below.

*Cost of notices assumed to be only £70; information not on website

If my sample is representative, it implies that couples in about one third of LAs in England and Wales cannot marry for the £127 that the law prescribes: rather, a ‘postcode lottery’ seems to determine the minimum cost of getting married.