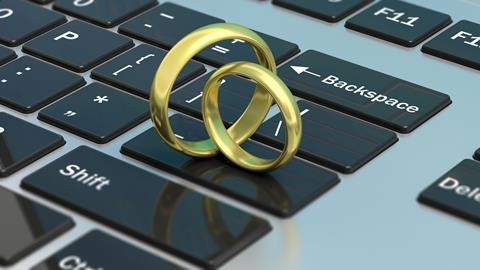 In an earlier article, I explored the cost of getting married in a minimal ‘two-plus-two’ ceremony, as publicised on the websites of 34 local authorities (LAs) in England and Wales, and concluded that couples in about one third of those areas cannot marry for the £127 that the law prescribes.

This article explores the availability of such ceremonies, again using only information from public-facing websites.

Two-plus-two ceremonies were available in varying numbers of venues in the 34 LAs. Five websites – Anglesey, Bromley, Camden, Cumbria, and Walsall – did not mention any venues. Somerset offered six, Powys five, and Hertfordshire three, and 26 LAs advertised only one.

There were considerable variations in the days and times when two-plus-two ceremonies were available. Nine websites – Anglesey, Bromley, Camden, Cheshire West and Chester, Cumbria, Pembrokeshire, Redcar and Cleveland, Walsall, and Windsor and Maidenhead – did not mention days or times. A few websites specified one or two time slots, but most mentioned either a span of times – such as Swindon’s ‘1.00 pm to 3.30 pm’ – with no indication of whether the last ceremony could begin, or must end, at the later time – or included vague descriptions such as Barking and Dagenham’s ‘Tuesday mornings’.

These inconsistent descriptions of days and times, coupled with the varying numbers of venues, made it necessary to make some assumptions in order to calculate the notional maximum number of two-plus-two ceremonies that could take place in each LA in one week. These were: each slot lasts 30 minutes, there are no breaks in specified time spans, the final ceremony can start at the later time in a span, there are six slots in a half-day, there are 12 slots in a day, and LAs with multiple venues offer all their slots in every venue unless otherwise stated. The most authoritative population figure – people aged 15–74 in England; everyone in Wales – for each LA was divided by the maximum number of weekly slots to calculate a notional minimum number of people per slot per week. The results are shown below.

* I assumed that half-hour slots are available throughout all the times when each register office is open.

† I assumed that two-plus-two ceremonies are available throughout the day, giving 12 per month.

These figures suggest that, in some areas, it would be virtually impossible for a couple to book a two-plus-two ceremony within a few months of deciding to marry, so it is likely that some couples are being forced to pay more than they should have to, if they wish to get married reasonably quickly.

I conduct documentary research on the internet every working day, and I knew exactly what information I was looking for, yet I could not always find it. Many people seeking information about marrying will use the internet principally for leisure, and will not know that there are fees for anything other than the ceremony, or that the availability of a two-plus-two is limited. It is likely that, on some LAs’ websites, they will be unable to find the information they need – or even to discover what that information is.

The Law Commission has an opportunity to recommend that the home secretary should instruct the registrar general for England and Wales to issue regulations obliging the ‘proper officers’ of all LAs to guarantee that all couples can marry for no more than the prescribed fees, and that the availability of two-plus-twos must be substantially increased. The regulations could usefully be supplemented by a Circular, supplementing the Handbook for Registration Officers – Marriages, stipulating that the necessary information must be readily accessible on LAs’ websites. This would bring a welcome end to the current absurdity that the cost and availability of a two-plus-two ceremony are determined principally by where the potential spouses live.