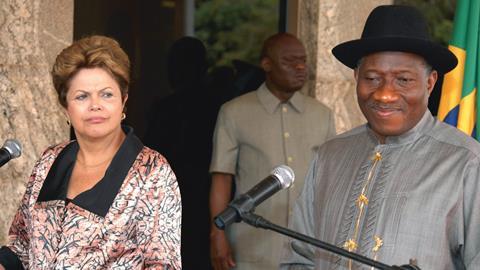 Brazil and Nigeria are taking very different approaches to dealing with alleged corruption in the oil sector.

Brazil and Nigeria are relatively new democracies, and rapidly emerging economic powers with the prospect of a bright future for their large populations. However, they share a problem. The oil sectors that could, and should, support that future are undermined by corruption. However, as we have seen recently, their responses to this common difficulty have been very different.

In Brazil the police are currently unearthing the deals and deceits making up ‘Operation Carwash’: $9bn of suspect transactions by Petrobras, the 40% state-owned oil company. A large part of these transactions likely took place while the current president of Brazil, Dilma Rousseff (pictured, left), was chairman of the company. The ruling Workers’ Party treasurer João Vaccari (he has previously denied wrongdoing) and 26 others have been charged with corruption.

Petrobras chief executive Maria das Graca Foster, among others, resigned on the orders of the president.

Operation Car Wash comprised a systematic and long-term practice of contractors overcharging on contracts and paying kickbacks to both Petrobras executives and politicians. So far, neither Rousseff nor the outgoing chief executive have been implicated, but the recent indictments bring the scandal very close to home and may yet topple Rousseff’s government.

What is apparent is that, no matter how embarrassing for the government, Operation Car Wash is being investigated, both nationally and internationally. By the end of last year the Brazilian police had indicted 39 people for allegedly participating in a criminal organisation which orchestrated the payment of bribes from Petrobras contractors to politicians. And the indictments keep coming. It has been reported that prosecutors are aiming to recover $400m from the perpetrators.

The US Securities and Exchange Commission, and Department of Justice are also reported to be making enquiries, while Petrobras has instructed Brazilian law firm Trench, Rossi e Watanabe Advogados and US law firm Gibson, Dunn & Crutcher to carry out an independent internal investigation.

The Petrobras scandal may be messy and an embarrassment that will end political and commercial careers, but it will reach a public outcome. Accountability, even if for Rousseff it is accountability for proximity rather than complicity, will have been enforced. While some wrongdoers may escape the net, the public perception of the risk-reward equation of corruption will be shifted in the right direction.

In the meantime, Nigeria has a different approach to missing money in the oil industry. Lamido Sanusi was appointed governor of the Central Bank of Nigeria in June 2010 for a five-year term. In February 2014 he raised questions about shortfalls in oil receipts from the Nigerian National Petroleum Corporation (NNPC), the state oil corporation.

The scale of the problem is hotly contested. Sanusi reportedly started with queries about $50bn. These were subsequently revised down to ‘only’ $20bn but, according to press reports, even Nigerian ministers accepted that the amount in issue was $10.8bn.

The response of Nigerian president Goodluck Jonathan (pictured, right) was to suspend Sanusi from office, on the grounds (widely reported) that he had been responsible for financial mismanagement of the Central Bank. Sanusi was subsequently also alleged to be involved in terrorist financing and investigated by the Nigerian State Security Service. None of these allegations seems to have come to anything and Sanusi successfully sued the government for harassment, obtaining an injunction, an order for compensation and the return of his passport.

The pressure was sufficient to force the government, through its well-respected finance minister Ngozi Okonjo Iweala, to announce in May 2014 that PricewaterhouseCoopers (PwC) had been appointed to carry out an independent forensic investigation. The highlights of that report, although not the report itself, were finally released last month by the auditor general of Nigeria.

The response has been mixed. The opposition say that the report lacked credibility from the start and the house of representatives has reportedly invited PwC to explain its findings, and indeed to hand over the report itself, citing concerns that it raises more questions than it answers.

NNPC says publicly and loudly that it has been vindicated by PwC and there have been press reports denouncing Sanusi for lying. The public are urged to move along; nothing to see here. But even the government-sanctioned ‘highlights’ of the PwC report raise some difficult questions.

PwC’s view is that NNPC must account to the government for $1.48bn. This is far short of the original claims of missing revenues and NNPC has been quick to say that this was for various non-revenue amounts and never in dispute (although it would presumably also accept that it has not, to date, been paid).

PwC has also apparently urged an immediate overhaul of NNPC, criticising it for an unsustainable business model under which it cannot pay its operating costs and make payments due to the Nigerian state without third-party funding.

PwC also questioned NNPC’s transfer of rights for eight oil fields for a quoted amount of $1.85bn. PwC has reportedly expressed surprise that the amount payable was not higher, and apparently only $100m has actually been paid so far, which is a significant shortfall.

PwC added to this concerns about the infamous Nigerian kerosene subsidy. This is $3.38bn seemingly spent by NNPC on maintaining a target price of 25 cents per litre in the domestic kerosene market.

However, the previous president, Umaru Musa Yar’Adua, directed the subsidy to end in 2009 and it has not been included in the national budget or appropriated for spending since. PwC was told that payments had continued despite the president’s ruling and the lack of budgeting arose because the instruction was not formally gazetted.

Oddly, despite being paid since 2009, the subsidy seems to have had no effect on the domestic kerosene market, which had been steady at around 90 cents per litre until a few weeks ago, just in time for the (now postponed) presidential election, when it dived to 30 cents per litre in response to government intervention. There is some scepticism in Nigeria about where the subsidy might actually have gone – the accepted wisdom being that it has been stolen.

Even on the kindest interpretation of the PwC report, the $6.6bn that it has identified as questionable dwarfs the $400m that the Brazilian investigators are seeking to recover.

Corruption is a crucial issue in the Nigerian election campaign. Both sides shout their commitment to eradicating it, but is this any more than noise? Commitment is about actually doing something, but the only government attempt at enforcing accountability for NNPC’s missing money has been directed at Sanusi for raising the issue in the first place.

As it stands, it looks as if Nigeria and Brazil are taking very different approaches to dealing with corruption in the oil sector. Brazil has unpleasant headlines, international intervention and surely more political disruption than its president would like. However, enforcing accountability for Operation Car Wash may be a fresh start for Petrobras.

I doubt that anyone would describe NNPC’s position in the same way.