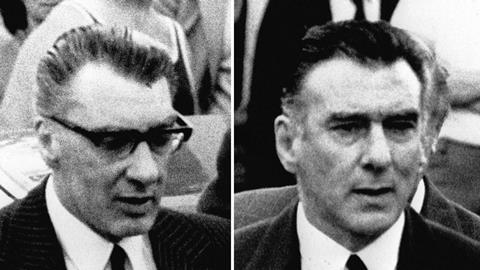 If the Krays were sentenced today, would their sentence still be remarkable? asks Shamsun Nahar

The recent release of the film Legend has revived interest in the notorious lives of Ronnie and Reggie Kray, East End gangsters who perpetrated organised crimes during the 1950s and 1960s. In March 1969, the Kray twins were convicted of the murder of Jack McVitie and George Cornell. They were sentenced to life imprisonment with a recommendation they should be detained for a minimum of 30 years – at the time the longest sentences ever passed at the Old Bailey for murder. Is this, in fact, a ‘legendary’ sentence by today’s standards?

Armed robberies, arson, protection rackets, assaults and murder were all allegations levelled at the Kray twins. Ultimately, however, it was their conviction for murder that concluded their reign in the East End. The twins’ defence comprised categorical denials of all charges and the discrediting of witnesses by underlining their criminal past. Their trial was the longest and most expensive murder trial heard at the Old Bailey.

Between 1957 and 1965, there were two degrees of murder. One carried the death penalty and one life imprisonment. When capital punishment was abolished in 1965 murder carried a mandatory life sentence. Premeditation and the brutality involved were clearly aggravating features when it came to Judge Melford Stevenson sentencing the Krays. Their use of weapons, coupled with the damning evidence of witnesses, is likely to have contributed to the considerable sentence that was imposed. Notably, had the Krays been sentenced four years earlier, there is little doubt that they would have received capital punishment.

If, however, the Krays were sentenced today, would their sentence still be remarkable? The present sentencing framework for murder is contained in the Criminal Justice Act 2003, and requires the sentencing judge to establish a minimum term that has to be served before the Parole Board may consider whether it is safe to release the convict on licence. The court must first allocate a starting point under schedule 21 of the act which prescribes five starting points:

According to Ministry of Justice (2015) offender management statistics, there are currently 52 people serving a whole life sentence. Among the convicts who will never be released from prison are Michael Adebolajo, sentenced to a whole life term in 2014 for the murder of British army soldier, drummer Lee Rigby; Ryan Matthews, who murdered a healthcare assistant at a Gloucester hospital; and Jason Gomez, who stabbed a fellow prisoner over 190 times with a thin black handle and a knife wrapped in material. Matthews and Gomez had previous convictions for murder.

Based on the above, if the Krays were sentenced today it is unlikely that their offending would qualify for a whole life order. The murders committed by the Krays are not on a par with the recipients of a whole life order such as Adebolajo, Matthews and other infamous murderers such as Ian Brady, Myra Hindley, Rosemary West, Peter Sutcliffe and Harold Shipman. The Kray twins’ felonies can be distinguished from these individuals because fewer victims were involved and the crimes are less abhorrent.

Arguably, based on the crimes committed, a minimum term of 25 years would be a more suitable sentence now. There have been substantially more serious crimes committed since the Kray trial and the maximum sentence has increased accordingly.  Therefore, from a legal perspective, perhaps the Krays are not in fact the legends the film suggests.