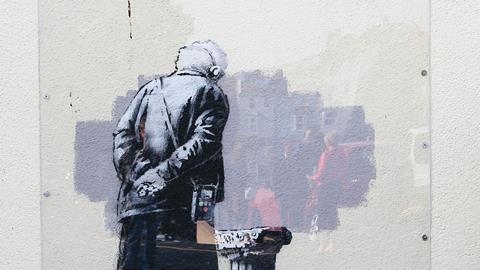 A Banksy mural that appeared on the back of an amusement arcade triggered a groundbreaking legal dispute, write Tim Maxwell, Becky Shaw and Andrew Bruce.

In a judgment handed down on 11 September in The Creative Foundation v Dreamland Leisure Limited [2015] EWHC 2556 (Ch), the High Court held that a tenant was not entitled to remove a Banksy mural from the wall of its leasehold property and must deliver it up to the claimant.

As well as being one of the first cases to consider the ownership of street art, it also raises points of general importance in landlord and tenant law.

The mural in question, ‘Art Buff’ (pictured), appeared on the back of an amusement arcade in Folkestone in late September 2014 during the Folkestone Triennial, a public art event organised by the Creative Foundation, a charity promoting the arts as part of the regeneration of the town. Art Buff quickly became popular locally, but just over a month after it first appeared, the tenant of the property, Dreamland Leisure Ltd, arranged for the mural to be cut out of the wall, without the landlord’s knowledge or permission, and then sent to the US where it was offered for sale.

Devastated by its removal, the Creative Foundation took legal action to seek the return of Art Buff. It took an assignment of the title to Art Buff and of the right to bring a claim for its return from the landlord, and started proceedings against Dreamland and two individuals.

In early 2015 the Creative Foundation obtained an injunction preventing the defendants from selling or otherwise dealing with the mural, and subsequently an order providing that Art Buff must be moved to a specialist safe storage facility. The Creative Foundation then applied for summary judgment on its claim for a declaration that it owned the mural and for delivery up.

There were two main issues for Arnold J to decide. The first concerned whether Dreamland was obliged to remove the mural to comply with its repairing obligations under the lease, and whether their chosen method of removal was reasonable.

Arnold J was ‘narrowly persuaded’  that the mural (as graffiti) needed to be removed to avoid the wall attracting further graffiti. With the repairing obligation engaged, Arnold J then considered whether Dreamland’s method of removal was reasonable, assessed objectively. Dreamland argued that it was advised that unless the mural was cut out of the wall, rather than being painted over or cleaned off, the wall would become a ‘shrine’ for Banksy followers and would attract further graffiti.

The judge was not persuaded by this argument and concluded that ‘Dreamland had no reasonable prospect of establishing that it was entitled, let alone obliged, to remove the mural in compliance with its repairing obligation’.

It was common ground that it was necessary to imply a term into the lease to determine what should happen to parts of the building, whether structural, decorative or everyday fixtures, which have to be removed by a tenant complying with its repairing obligations. It was also common ground that such parts revert to the status of chattels once removed from the building. The issue was what term should be implied in this particular scenario.

Perhaps surprisingly there was no authority directly dealing with the point, although Arnold J considered what authority there was in concluding that the term that should be implied was that the mural became the property of the landlord.

Four reasons were given for the decision. First, the default position is that every part of the property belongs to the landlord, and the tenant has the burden of showing that an implied term should transfer ownership of part of the building to it instead. Second, the fact that the tenant is discharging its repairing obligation does not justify an implied term that it acquires ownership of such a chattel, but only that it has permission to remove and possibly dispose of it.

Third, even if a term may be implied with respect to the ownership of waste or chattels with minimal value, it does not follow that the same term should be implied for chattels with substantial value. Finally, Arnold J held that where the value is attributable to the spontaneous actions of a third party, the landlord had the better right to that windfall than the tenant.

Tim Maxwell is a partner and Becky Shaw a solicitor at Boodle Hatfield; Andrew Bruce is a barrister at Serle Court