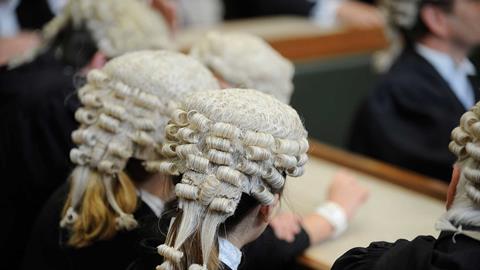 Boycott could cause cases to collapse

Major trials could collapse from next month if barristers carry out a threat to boycott criminal legal aid work in protest over proposed fee cuts in very high cost cases.

The Criminal Bar Association has said that 98% of criminal barristers will not work at rates due to be implemented for very high cost cases (VHCCs) in November. The government intends to cut fees by 30% for trials involving the most serious crimes, including murder, rape and fraud, even for cases that are ongoing.

After polling all criminal sets, CBA chair Nigel Lithman QC said serious cases could be left ‘hanging in the ­balance’.

Warning of the ‘devastating effects’ of the cuts, he added: ‘Serious cases are in danger of collapse due to inadequate representation.’

Criminal barristers doing the most serious work will return ongoing briefs and refuse to undertake new cases, he said.

A number of solicitors also seem likely to stop taking on cases. The Criminal Law Solicitors Association and the London Criminal Courts Solicitors’ Association have started an online campaign not to undertake work at the proposed pay rates.

Of 1,532 criminal litigation accredited firms contacted by the campaign, 266 had ‘taken the pledge’ as the Gazette went to press.

A statement by the campaign said: ‘We have an ethical duty to represent each of our clients in a robust, diligent and professional manner. No lawyer can fulfil this duty at the criminal legal aid rates currently proposed by the Ministry of Justice.’

The CLSA has also written to justice secretary Chris Grayling saying the government is making ‘an error of historic proportions’ in making the cuts, which are designed to save £220m a year.

The association warned him of the ‘appalling consequences’ of proceedings and the ‘wholesale collapse’ of the criminal defence market and justice system.

A Law Society spokeswoman said Chancery Lane is opposed to the cuts. In relation to VHCC work, she said: ‘While legal aid work is in general under-rewarded, there is widespread perception that VHCC work has been comparatively well rewarded.’

She added: ‘The focus of our concerns about proposals on fees has to be the everyday cases affecting thousands of defendants and their lawyers.

‘We would argue for fees to be protected for these, even if that meant VHCC fees had to suffer more substantial cuts.’

A Ministry of Justice spokesperson said: ‘We have one of the best legal professions in the world but, at a time when everyone has to tighten their belts, we have to find efficiencies.

‘At around £2 billion a year we have one of the most expensive legal aid systems in the world, and have no choice but to make the savings already outlined. We listened closely to the original consultation responses and brought forward proposals on criminal advocacy fees that built on comments from the Bar Council and bar circuit leaders, among others.

‘We want to engage constructively with stakeholders. We worked intensively with The Law Society to reach agreement on revised proposals for criminal litigation contracts. We are still consulting on advocacy fee proposals and continue to encourage views.’