The share price of listed law firm DWF rose to a new high this morning as the company reported upbeat financial news. In its interim half-year trading statement, released to the London Stock Exchange, the newly listed group reported increased revenue of at least 10% for the six months ending 31 October, driven by organic business growth.

International and connected services represented the strongest growth, with increases of 29% and 18% respectively.

DWF also said net debt had fallen by £9.5m (16%) on the same period last year, with a continued positive trend in lock-up reduction.

Shares in the company, which floated in March with an offer price of 122p, were trading at 129.5p by 11am, rising 3.2% following the publication of the trading statement. This is the highest shares have reached since DWF went public, with the price fluctuating between 115.5p in August and 127p last week.

Andrew Leaitherland, chief executive, said: ‘The first half of the year has seen a number of important milestones achieved as we continue to deliver on our IPO promises, developing the business in our first year as a listed entity. 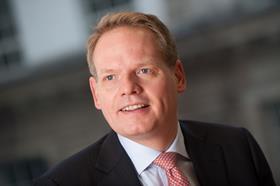 ‘Going forward, we will continue to supplement this organic activity with selective M&A, with our associations and broad market reach providing a strong pipeline of opportunities.’

The company has added 20 partners in the first six months of this trading year, including 15 senior hires to its international business. It also recently confirmed the acquisition of the majority of the shares in BT Law Limited, with Leaitherland and Chris Stefani, chief financial officer, agreeing to be directors.

DWF announced a 1.25p dividend per share last week. The company will announce its interim results, based on the six months to 31 October, next month.