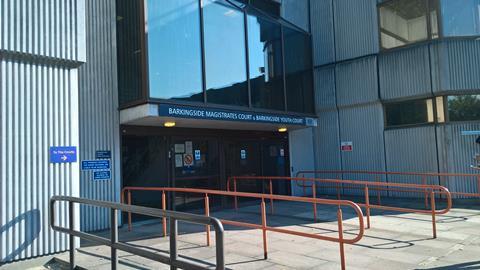 Access issues at an east London magistrates' court have become 'shambolic', the Gazette has been told, in a further sign of the poor conditions blighting some of the courts in England and Wales.

A lift used by the public and solicitors at Barkingside Magistrates' Court in east London continues to be out of action more than two months after it stopped working. Court users have had to make their way up a steep metal staircase to get to the five courtrooms, located on the first floor. The Gazette, which visited the court this morning, watched one woman with a walking stick take the 21 steps extremely slowly.

The lift doors on the ground and first floor have been cordoned off with tape.

The canteen, which is open on Monday, Tuesday, Wednesday and Thursday between 9.30am and 3.30pm is also located on the first floor. A notice by the entrance states that it is run by volunteers and 'the times above cannot be guaranteed'. The Gazette, during its visit, counted 40 people on the first floor who were unable to use the canteen because it is closed on Fridays.

A spokesperson for HM Courts & Tribunals Service said plans to repair the lift 'are underway, and alternative provisions are in place for those with mobility issues. All court cases are being heard and proceedings are running as normal'.

HMCTS says court staff have not received any complaints and cases have been unaffected. However, staff will continue to help with any cases where key participants are affected and ensure their hearing is moved to a building with more suitable access.

One court user recently saw a father struggle up the stairs carrying a buggy and an elderly lady on walking sticks also struggle. Another person turned up to court in a plastercast and using crutches. It is not known how they reached the first floor. Magistrates have also had to use the main public entrance because the door to their own lift is broken, the Gazette understands.

'The whole situation is shambolic,' the Gazette was told.