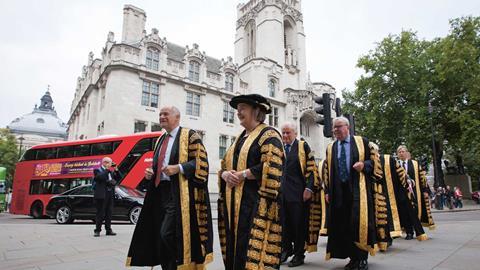 Solicitors are still struggling to get on the bench, with numbers falling over the past year, according to the latest judicial diversity statistics.

Figures published by the Courts and Tribunals Judiciary today show that solicitors accounted for 1,098 judges as at 1 April – compared with 1,154 last year.

Nearly eight in 10 solicitors are district judges sitting in the county court. Only one solicitor is a High Court judge. The population of barrister judges is 2,090, of which 105 sit in the High Court.

Although overall figures suggest that the proportion of female, and black and minority ethnic judges will increase over time, the numbers show only small progress.

The number of female Court of Appeal judges remains the same as last year, at eight out of 39. In the High Court, 22 of 106 judges are women, compared with 21 last year.

The number of female circuit judges has increased from 146 last year to 160 this year.

The percentage of court judges who identify as black, Asian and minority ethnic is 5% – one percentage point down on last year. The figure remains stable, at 9%, in tribunals.

‘However, we are disappointed that there has been no improvement in either courts of tribunals in the total percentage of judges from a BAME background. This is an area of concern and one where the [Judicial Diversity Committee of the Judges’ Council] will be considering what more needs to be done.’

A progress report from the committee shows that a judicial work shadowing scheme, set up in 1999, is particularly popular among solicitors, with district judge (civil) being the most popular role to shadow.

Other initiatives include networking events, a judicial role models scheme and a pilot support programme to provide a new route to the High Court.

Court of Appeal judge Lady Justice Hallett, in an introduction to the report, said the judiciary had long been engaged in activities designed to improve diversity but the establishment of the diversity committee by Lord Thomas ‘has provided an increased focus for our work’.