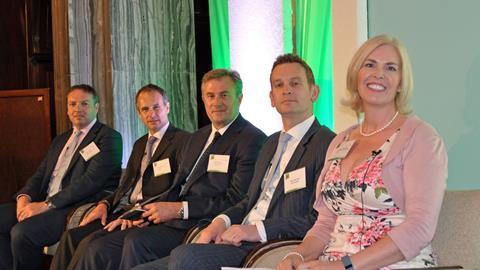 Here is the bad news. No matter how proud you are of your firm’s brand or how many years you have spent honing it, there is no guarantee that it will travel well to foreign jurisdictions, the Law Society’s international marketplace conference hears.

Paul Hopkins, international services partner at national firm Geldards, confides: ‘We have offices in Nottingham, Derby and Cardiff. Unfortunately, to many of our American colleagues, Nottingham equates with Robin Hood, Derby with a horse race and Cardiff with a seaside town near San Diego, California.’

Speaker after speaker at the conference stresses that seeking fresh opportunities overseas is a long-term project. It takes time, resources, planning and commitment. Or as one senior marketing director advised Clare Murray, managing partner of niche London employment and partnership firm CM Murray: ‘There will be plenty of time to sleep when you are 90. In the meantime, you shouldn’t ever want to go to bed, even after five networking drinks receptions and two dinners on the same evening.’

Happily, there are bodies out there that can help you snatch 40 winks while still prospecting for business. There is the Law Society, for example, as well as the International Bar Association (IBA), American Bar Association (ABA), Union Internationale des Avocats (UIA) and UK Trade & Investment (UKTI). There are smaller networking groups, too, ones that often focus on specific areas of the law. And then there is social media. ‘These are all good ways of developing your visibility,’ James Hickey, CEO of international law and accountancy firms support group Alliott, says.

The conference, attended by 116 delegates from 22 countries, starts with a panel discussion: How can your firm go global? Andrew Chalkley, CEO and partner of Reading firm Boyes Turner, describes the firm’s international business as ‘fostering targeted relationships across borders to develop and enhance the service we can provide to clients in the UK and internationally’.

At its core, he says, is the forging of ‘close collaborative relationships with like-minded firms in other jurisdictions’, allowing Boyes Turner, on behalf of its clients, to project-manage transactions and control costs in other countries. He gives the example of working with a large Polish law firm to acquire a business within Poland for a US client based in Chicago.

Murray describes her employment firm as ‘super-niche, competing against huge firms with enormous budgets and regiments of lawyers’. It is ‘too small to find the time to pitch’ for contracts, she says, ‘and works entirely through referrals’.

Murray says much of her firm’s marketing activity is focused on international conferences, simply ‘being there and making relationships’ through involvement with the various panels and sub-committees. All lawyers from the moment they join the firm are expected to work hard at networking to build relationships and generate referrals. ‘When we interview prospective employees, we ask ourselves if we could put them on a plane to New York next week. Do they have the engagement and cultural empathy that is the hallmark of the firm?’

In return, says Murray, working for the firm can be exhilarating. ‘If the choice is between Croydon employment tribunal and Los Angeles, which would you choose?’ she asks. ‘But it’s a long game. Creating and mentoring practice builders is not something you can dip in and out of. It’s a long-term investment.’

The panel discussion chair, City firm Berwin Leighton Paisner senior partner Harold Paisner, voices what he considers a ‘controversial’ observation. ‘The whole concept of going global is dated,’ he says. ‘Few firms are truly global, but are focused in specific areas where there is profitable work to suit their special skills.’

He instances magic circle firm Linklaters, which divested itself of most of its eastern European offices because there was insufficient ‘serious work’ for the firm in those regions. Most of these firms now come under the banner of independent international firm Kinstellar, which is an anagram of Linklaters.

Rob Millard, a partner and law firm strategy and management consultant at Møller PSF Group, says that firms generally make three mistakes when expanding internationally. ‘The office you open in another jurisdiction will never become a smaller version of the mother ship,’ he says. ‘Each market is different and you should adapt to achieve your objective at the best price. Don’t open a full-blooded office if an alliance with a local firm would do the job.’

The second common mistake is to assume that a ‘strategic alliance will naturally happen’. On the contrary, ‘there is much work to be done to align systems and practices across the firm’, Millard says. Third, firms often fail to measure the performance of particular offices rigorously enough. An overseas office might be undervalued because it is not obviously profitable, he says, but what if it is providing the rest of the firm with work?

Elizabeth Fehnrich, an international trade adviser at UKTI, tells the conference that her organisation can advise and support firms wishing to go global in several ways. It offers one-to-one mentoring programmes and seminars to help firms understand what strategies to adopt. It organises trade missions. And it facilitates access to British embassy staff in target countries, who can provide a shortlist of local firms of interest. ‘Sign up for our business opportunities and events alert,’ Fehnrich says. ‘It could be of real value to your firm, or even your clients.’

The next panel discussion, chaired by Christina Blacklaws of Kent firm Cripps, focuses on ‘developing your international strategy’. Blacklaws starts the debate by asking about the importance of joining or forming a network and also wonders aloud whether, once a firm is a member of a network, clients may have the perception that they are being ‘sold on’.

‘We have 320 lawyers, all based in London apart from three – who work from our Paris office and practise only English law. We have no plans to open more offices overseas, but are going to continue advising our clients through carefully chosen best-in-class firms worldwide. We have a horses-for-courses approach, with price, location and expertise paramount. Travers Smith is the legal quarterback that runs the deal and organises the team – and whose lawyers travel to all corners of the globe with clients.’

Geldards’ Hopkins tells the conference that his firm belongs to the International Business Law Consortium and to the Germany-based DIRO network, both of which allow the firm to benefit from the expertise of lawyers in all the major jurisdictions. The result is a thriving international practice, but, he stresses, it is still important to get ‘buy-in from the firm’s partners because otherwise it’s just Hopkins off on another jolly’.

Alliotts’ Hickey says the network, which is active in 70 countries worldwide, help firms become the ‘go-to firm’ in their area of practice. ‘We also try to bring them new business through our strategic partnerships with banks, GC forums and other influential bodies. It is all about focus and alignment.’

Global firm Eversheds partner and chair of international Alan Murphy says: ‘When collaborating with overseas firms, culture is all important: if we can’t work with a firm as a trusted partner in an international team, then the relationship is a non-starter.’ Eversheds has 55 offices in 33 jurisdictions.

The third panel discussion, chaired by British Spanish Law Association chairman Alberto Perez Cedillo, considers ‘making the most of international organisations’. He says joining a large association such as the IBA can be ‘overwhelming… a little like marriage’. You need a business plan, he says, to take full advantage of what can be an expensive relationship.

Adam Farlow, City firm Baker & McKenzie partner and an officer of the ABA’s international section, tells the conference that the ABA is not just about networking, referrals, newsletters, projects and international legal exchanges. ‘It is also fun,’ he says. ‘You see a lot of smiles at the conferences. The gruff types who would rather be back at the office are back at the office. You can relax a little.’ He adds: ‘The key words are: “I’m happy to take that on.” If you show willingness, you will soon be fully involved.’

Stephen Denyer, the Law Society’s head of City and international, agrees: ‘Giving your time as a volunteer will win you approval. But don’t be overly competitive by trying to stuff the panels with your own firm’s partners. Don’t claim to be an expert when you are not. And never take on work that you can’t complete on time.’

City firm Fox Williams partner Mark Watson recommends membership of the UIA. ‘It is the oldest worldwide legal organisation. It promotes professional development and supports lawyers globally who are being persecuted for doing their jobs. The conferences are very valuable, but don’t send all 5,000 delegates a copy of your firm’s brochure. Try something memorable and more personal.’

IBA president and Debevoise partner David Rivkin notes that its annual conference is attended by around 6,000 lawyers from up to 172 member countries.

‘You should have in mind what you want to achieve before going to the meeting,’ he advises. ‘There are 70 committees handling different areas of the law, some of which you might find more useful to attend than some of the plenary meetings.’ Volunteering to make yourself useful will also get you noticed, he adds.