Mergers have driven strong profit growth at a number of 20 top-ranking firms over the past year, with the rest of the market slightly down, according to a Gazette analysis of UK-based firms’ Companies House filings for 2012/13.

On average, discounting the highest and lowest outliers, firms posted a profit drop of 2%.

Tony Williams, analyst at consultancy firm Jomati, said most of the double-digit profit growth reflects the outcome of a strong acquisitions strategy.

‘It’s not surprising that firms such as DWF have done so well, as it has been particularly acquisitive and benefited from the Cobbetts acquisition. Pinsent Masons’ merger with Scottish law firm McGrigors in 2012 also led to a huge jump in profits at the firm, he said.

Alex Hodgson, financial director at DWF, said the firm was on track to increase turnover to £200m for its financial results for 2013/2014. ‘This is because of the full year impact of the Fishburns and Cobbetts acqusitions,’ he said. However, he added, the firm was also seeking to increase revenue through measures such as increasing workforce agility.

George Bull, chair of professional practices group at accountancy Baker Tilly, said Allen & Overy was ‘storming ahead’ in terms of profit margins, but other firms were faring less well.

‘When you take away the masking effect of mergers, you can see even in the top-20 there is considerable turmoil. Some are in the early stages of recovery but others are still having difficulties.’ 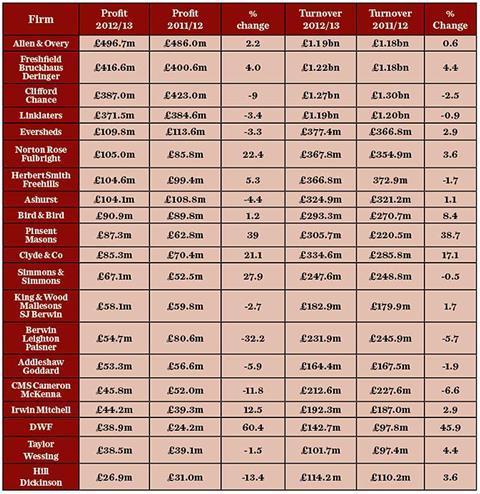