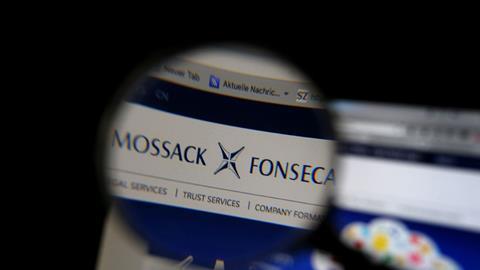 The government continues to investigate dozens of firms to establish their links with the firm at the heart of leaked Panama papers.

Chancellor Philip Hammond today said a taskforce set up following the leak in April has contacted 64 firms to determine their links with Panama firm Mossack Fonseca.

These contacts will establish ‘potential further avenues for investigation’. It is expected law firms will be among those contacted.

The Treasury joined forces with the Home Office earlier this year to analyse the information made available from the International Consortium of Investigative Journalists.

Since then, 43 high-net-worth individuals have been placed under special review while their links to Panama are investigated.

A further 26 offshore companies, whose beneficial ownership of UK property was previously concealed, have been identified as potentially suspicious.

In a written statement to the House of Commons, Hammond said the taskforce has added greatly to the UK’s understanding of the ever-more-complex and contrived structures that are being developed to mask offshore tax evasion and economic crime.

‘This intelligence will ensure that the UK remains uniquely placed to contribute to the international effort to uncover, and take action, on wrongdoing, regardless of how deeply hidden the arrangements are, as well as identify those jurisdictions where regulatory oversight requires improvement.’

In the aftermath of the leak, a number of UK law firms were named as having links with Panama, including Simmons & Simmons, Holman Fenwick Willan, Clyde & Co, Mishcon De Reya, Taylor Wessing, Allen & Overy, Norton Rose and Clifford Chance.

There is no suggestion that any firm breached any rules.

The Solicitors Regulation Authority wrote to named firms for clarification on their role but said today it has yet to take any enforcement action.

The City of London Law Society told the Gazette in May that there may be good reasons why City firms would want to work with a firm in Panama.