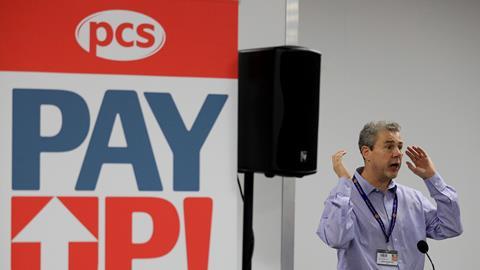 One of the largest trade unions in the UK has threatened to take industrial action if the government axes up to 700 jobs under plans to restructure the way criminal fines are collected. The Public and Commercial Services Union (PCS) says HM Courts & Tribunals Service's centralisation plans are 'a taste of what will happen' across the whole of the department as the government forges ahead with IT-based reforms.

Last week, HMCTS announced that Birmingham and Stoke-on-Trent will host two service centres, employing more than 300 people each in roles involving processing cases, issuing court orders and hearing notices, as well as answering telephone and online enquiries. The announcement concluded with plans to centralise the collection of criminal fines. Staff based in 50 locations across England and Wales will be moved into three centres: in Leeds, Runcorn and Cwmbran.

HMCTS told the Gazette that it will recruit and deploy existing courts and tribunals staff, and look at the 'wider employment market' for the two service centres.

On the criminal fines restructuring plans, HMCTS confirmed that around 1,200 staff are employed in the National Compliance and Enforcement Service, which is responsible for enforcing magistrates' and Crown court sanctions. By 2019, HMCTS expects to reduce the workforce by around 60%, to 500 staff. HMCTS confirmed it will help permanent staff find roles either in the transformed compliance and enforcement service, HMCTS, MoJ or the wider civil service. 'We also expect a significant proportion of the reduction to come from natural turnover,' a spokesperson said.

PCS has vowed to fight the centralisation. The union says HMCTS, following pressure, has agreed to let PCS make the case against closures. The union is now consulting members.

Mark Serwotka, PCS general secretary, said the union will 'produce strong cases against office closures which we expect the employer to listen to and act upon. Failure to do so will give us no alternative but to actively consider all other means to stop the closures including industrial action'.

PCS believes HMCTS 'must make decisions based on people, their lives and expertise. All of which are at risk if this proposal goes ahead unamended', the union said on its website. 'This decision, which impacts upon staff working in the National Compliance and Enforcement Service, is a taste of what will happen across the whole of HMCTS as functions are centralised and jobs are cut as a result of the digitisation of the courts and tribunals service.

'HMCTS also plans to privatise the work of the civilian enforcement officers where work will be transferred to private sector bailiff companies and will no longer be directly answerable to the judiciary.'

A spokesperson for HMCTS told the Gazette: 'We are transforming the way we collect fines to make it faster and more effective, saving the taxpayer £467m and increasing the amount of money we recover. The new system will improve efficiency, reduce delays and increase the amount of fines collected. We are working closely with unions and will offer our full support to staff throughout this change.'