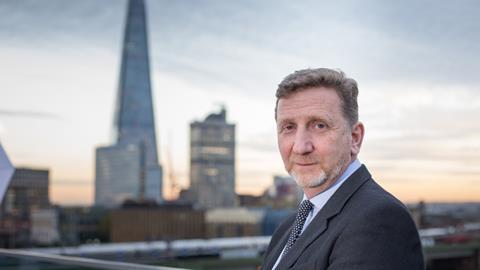 The City used to be a place where concepts such as ‘sustainability’ and ‘social capital’ were regarded with nigh-on universal suspicion. The Square Mile was hardly a natural habitat for people whose focus in life was to promote altruistic purposes.

Bates Wells Braithwaite (BWB) is one law firm that rather defies the stereotype; and somewhat ironically when it comes to ‘sustainable’. The firm’s headquarters, a gleaming mid-rise office block fronting the Thames by Southwark Bridge, formerly housed the European arm of King & Wood Mallesons – the legal profession’s biggest insolvency yet.

Asked for an exemplar of what his firm is all about, managing partner Martin Bunch immediately cites Coleman v Attridge Law, ‘a pro bono case that changed the law’.

‘It was about associative discrimination for disability,’ he recalls. ‘A secretary in a law firm had been discriminated against because she had to take time off to look after her disabled son. We helped her with this case and it went to tribunal. The tribunal said, “well, basically, it does feel like it’s wrong, but there’s no law at the moment which protects you”. So, we took it all the way to Europe.

‘Eventually, we won. It was found that the Disability Discrimination Act should have effect here, so the government brought in an amendment to cover associative discrimination. So you can now be covered because you have (for example) a disabled child and you have to take time off to look after them.’

A good result then? ‘It really felt like that’s what employment law should be about,’ Bunch says.

He is quickly on to another pro bono case which comprises a major commitment of resources for BWB – representing Uber drivers and CitySprint bikers in their bid to be defined as employees. ‘We’re doing that case pro bono too, both because we can and feel that it’s important. Those people deserve to have a hearing, whether they’re right or wrong. I just feel it’s right that we should go and represent them.’

And there is more. BWB is a sponsor of the The Future of the Corporation project by the British Academy, the UK’s national body for humanities and social sciences. BWB also set up the Stephen Lloyd Awards, a foundation named after a BWB senior partner who died in 2014, which aims to help social enterprise start-ups. One per cent of the firm’s profits are donated to charity, too.

All grist to the mill in terms of Bunch’s bid make BWB a ‘Benefit Corporate’, or ‘B Corp’, which is an accreditation marque that will be confirmed in testing by KPMG.

‘It doesn’t mean we’ve become a charity, of course,’ Bunch adds. ‘It means that we feel we’ve got a purpose for being a law firm and what we want to do and how we do it.’ There is a benefit to seeking a measure of validation that everyone in BWB, including non-lawyers, can get involved in.

We are still not quite on the subject of making money, but the business case starts to form. A ‘B Corp’ business is better insulated from failure, Bunch notes, pointing to the conduct that led to the financial crisis and the costly Volkswagen emissions scandal. And the aspiring lawyers that BWB and its rivals need to recruit seem to be drawn to the firm by such commitments. He cites 900 applications for the firm’s six trainee places.

So, at last, to fee-earning. Bunch describes the charity social enterprise team as ‘the engine room of the firm’. There have been lateral hires of corporate finance lawyers and the team has had five internal promotions in the past year. Bunch says: ‘They’ve grown the most over the last five years of any of our teams. That’s a real success story for us, making the firm more balanced and bringing in more a commercial, corporate approach.’

BWB has grown faster than expected and is taking up more office space. In pre-empting the space it may need in the future, it has taken some that is in excess of current needs and let it to a ‘charity enterprise hub’.

The firm became an alternative business structure (ABS) because the model fitted with plans to reinforce BWB’s role as ‘trusted business advisers’.

‘We had very close ties to an accountant, Jim Clifford, who was at Baker Tilly at the time,’ Bunch recalls. ‘He came up with the suggestion that he’d like to join us because he’s very much into [measuring] social impact. He does social impact bonds and other similar ventures.’

BWB wanted Clifford, Bunch adds: ‘If we became an ABS, we could go into a partnership with people who aren’t lawyers. That was really our driving force.’

Clifford’s team has now grown to 16 people: ‘He advises on charity mergers, but before the lawyers are involved. So, we can almost give a service from the beginning.’

A charity transaction is still a transaction, he points out. For other new ventures, the firm’s financial services consultancy has grown to become a team of eight, advising on compliance and regulatory issues.

And of course there is employment law, which produces the firm’s most high-profile cases. Bunch came to this practice area late. ‘I was trained as an articled clerk at Simpson Millar,’ he recalls. ‘It was a trade union law firm based in Borough High Street.’ The firm’s lead client was the Communication Workers Union.

Bunch ended up in litigation, which he enjoyed, and arrived at BWB as a general litigator. ‘We then opened an employment department and grew that to about 12, 13 lawyers.’ With employment law developing fast, taking disputes away from general litigation, there was the opportunity to specialise.

Bunch became a partner in 1996. After joining the management team of the late Stephen Lloyd, he was elected managing partner in 2013.

The firm now has 37 partners, a third of whom are women. That figure would satisfy some firms, but Bunch says it is still too low: ‘It’s something that we’re very aware we need to improve. For the first time ever we have a three-day-a-week equity partner [termed senior partners at BWB]. We’re looking at our maternity policies, and working flexibly and in a more agile way. As we get bigger, it’s easier to be more flexible.’ Last year, he notes, one lawyer made partner while on maternity leave.

At a time when sexual harassment is dominating the headlines, I ask Bunch about the contentious area of non-disclosure agreements. He stresses that it is important to ‘have the ability to settle claims’, but is frustrated by the way the debate is playing out in public.

‘There was an awful discussion on Newsnight. They almost belittled it,’ Bunch says. ‘They were wrongly framing the questions, because [this] is about power. It’s about male-orientated areas which should be broken down… male-only clubs, male-dominated law firms. It just doesn’t work. You need to have diversity. It’s so important.’

As an employment lawyer, Bunch has seen discrimination added to unfair dismissal claims as an afterthought. But he is in no doubt that harassment is a serious and prevalent issue. ‘There is a real problem,’ he says. ‘I think it’s time to have that conversation as long as it’s not framed like the one on Newsnight… whether you can touch someone’s arm or not! It is about men being in positions of authority and power, and misusing that.’

He also observes that power close-up in sex discrimination claims, where often ‘all you can get for [a client] is money’. This clearly riles him. He recalls one client, a lawyer, who ‘came back from maternity leave [to find] she’d been moved out of her office. All her belongings, including all of her sanitary ware, were just dumped on a pile in this empty room. That was her first day back. She was bullied and harassed, and it was awful.’

Clearly, cultural change has some way to go in law firms. But Bunch is keen to close with some upbeat thoughts about the future, and the role of developing technology. ‘There’s a lot of fearmongering going on regarding artificial intelligence,’ he says. ‘I don’t think AI will ever replace lawyers. What we should be [about] is relationships, and machines will never take over those relationships.

‘We may lose a lot of jobs, but I think a lot of new jobs will be created. Digitalisation is good. We’ve become more efficient about how we deal with things and lawyers should see that as a positive thing.’

Underpinning that confidence is Bunch’s own experience of the recent history of employment law. He has seen the introduction of more statutes in 10 years than in the previous 150.

‘You need lawyers to handle that,’ he stresses. Yes indeed.