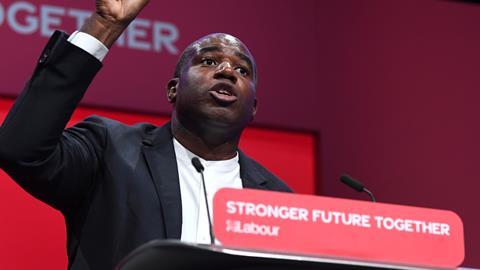 There was an irony in a week where Labour tied itself in knots over the issue of a minimum wage, that its shadow justice secretary effectively wants to require lawyers to work for nothing.

David Lammy’s proposal to deny government contracts to any City firm not releasing each lawyer for 35 hours a year in pro bono work went down well with delegates at conference. One can only imagine how equally enthusiastic the union leaders in Brighton would have been if their members were being asked to give their services for free.

The issue here is not with being asked – or even required – to work pro bono. Most lawyers in the biggest firms are willing to put something back into a profession which binds those working at all levels.

But Lammy’s announcement will ultimately be a disappointment to many, because it suggests that Labour has no plans to properly fund a functioning justice system, and is instead seeking to rely on mandated work to cover the glaring gaps. Those delegates clapping at the idea of wringing more from City firms were oblivious to the reality that they were being hoodwinked. This plan is like fixing a leak with a law firm-branded umbrella, while doing nothing to repair the roof.

The reality is that most firms in some shape or form commit this kind of time to pro bono anyway. There are numerous examples of collaboration between City firms and law centres, and plenty of times when their help has been invaluable. As my colleague Eduardo Reyes pointed out, the National Autistic Society was represented pro bono by Clifford Chance in a disability test case appeal – a great example of using the skills and expertise of City firms to make a real difference on the ground.

There would certainly be concerns if Lammy’s plan led to inexperienced junior lawyers being parachuted into client-facing situations for which they are not prepared. For this proposal to work, law centres and other organisations where pro bono might work would need significant investment to ensure that the work is properly allocated and organised and that partnerships actually benefit the client. Labour’s proposal lacks detail on this, as well as how the 35 hours per year would be calculated. Would senior partners be included, or would it involve taking an average across the firm, with juniors disproportionately working more pro bono hours to cover for colleagues? (One cynic even suggested to me that firms could simply employ a dedicated full-time pro bono solicitor who could bring the average up and ensure no-one else has to do it.)

What was curious about Lammy’s speech was that he focused on the profits being made by the biggest firms and said this justified them doing more pro bono work. If anything this increase in profits (which is, largely, undeniable across the biggest firms) suggests they have money to spare rather than time. Lammy’s proposal harks back to Michael Gove’s plan to impose a levy on City firms – an idea which barely got off the ground – and perhaps is even more radical.

Whether it’s money or hours demanded of the legal sector, we all know the real issue here: the abrogation of responsibility to properly fund a functioning justice system. Labour might talk a good game about legal aid being a pillar of the welfare state, but the coffers are just as empty for them as for the Conservatives. Lawyers will pick up the slack if asked to, but it isn’t solving anything.