Passchendaele's toll on the profession

In the November 1917 edition of the Law Society Gazette, the monthly Roll of Honour fills two pages. Although solicitors were serving in the British Army and Royal Navy on several continents, most of the 32 deaths were recorded as being 'in France'.

The bulk of them were in the course of a single battle, the three-month offensive from Ypres that would be remembered by the name of the Belgian village where the attack petered out: Passchendaele.

At least one of the dead is being remembered by the profession a century on. William Henry Myddelton Kersey (known as ‘Myddelton’) was the only son of William Edward Kersey, who founded Kerseys Solicitors in Ipswich 1881. He was expected to follow his father into the firm, but was killed at the age of 24 on 17 October 1917. 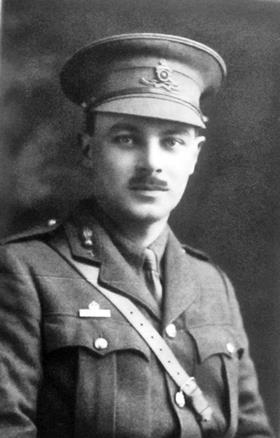 On the anniversary Kerseys, which is today based in Ipswich and Colchester, held minute’s silence as a mark of respect. Managing and senior partner Anthony Wooding said: ’It’s sad, but also important to be reminded of our long history. It helps us to put our difficulties into perspective and recognise the opportunities many of us have today. Sadly, there is still fighting and suffering in the world. We want the occasion to show our respect for those who died in the First World War and in tragedies since.’

Myddleton Kersey studied at Wellington College, Berkshire and Magdalen College, Oxford. He became an articled clerk at Cozens-Hardy and Jewson, a firm of solicitors in Norwich. There were hopes he would join Kerseys in time. He joined the Essex and Suffolk Royal Garrison Artillery in 1915 and was promoted to captain in 1917. He served at home until 1916 prior to embarkation to France.

Myddelton was killed near Ypres, Belgium, when a stray shell fell on his unit’s dug-out in the early hours of the morning, while they were sleeping.

In a letter of condolence to the Kersey family a fellow officer, Captain Leonard Amis Hempson, wrote: ’Myddleton was greatly loved and respected by all the men’ and that ’his death had taken all the heart out of them when I was down there this morning’.

Myddelton is buried at The Huts Cemetery near Ypres in Flanders, Belgium. A battlefield cross was given to the family in lieu of his body, which has been placed at St John the Baptist Church in Felixstowe in his memory. 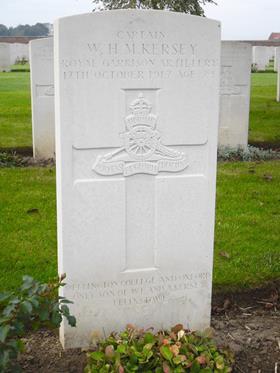 An obituary from his family reads: ’In proud and ever loving memory of our very dear and only son and brother William Henry Myddelton Kersey, captain 166 siege Battery, Killed near Ypres Oct 17 1917.’

In a letter to Myddelton’s father on 13 November 1917, Mr Warren, principal of Cozens-Hardy, said: ’I had a real regard for him. He was quiet, modest, not pushing or showy or self-centred, but a very sterling fellow, and I am sure his loss is no small one.

’I remember well his coming and talking to me about the choice of his profession. I thought he showed very sound judgment, and a very admirable spirit. He was keen, always on the right side[,] and I was grateful for his influence.’

William Kersey replied: ’Of course I did so look forward to his joining me in my practice and his living companionship and assistance in the future was what I was longing for. I feel at times [that] all my interests in life have disappeared.’