Red October anniversary should be nothing to celebrate

For some reason, despite all the evils that have been revealed, Soviet Communism continues to enjoy a gentler ride from western liberals than that granted to other twentieth century totalitarian regimes. Next month’s centenary of the Bolshevik revolution has inspired artistic, theatrical and trade union events in the UK - I’ve even had a flier for a ‘revolution meal deal’ at an up-market brasserie.

Let’s hope the legal world avoids this trap. By any measure, October 1917 and its aftermath was a catastrophe for the rule of law. Not just for the millions who died in the ‘temporary excesses’ of Stalin’s Great Terror but for all those who suffered - and continue to suffer - under a system where the ruling party stands outside the law.

The very enormity of Stalin's crimes in the 1930s and 1940s obscures the fact that contempt for the law was present throughout the Soviet experiment, from Lenin's 1918 call for 'mass terror' to the final dissolution of the remnants of the GULAG system under Gorbachev in the 1980. Let's also not forget that October did not overthrow an absolutist monarchy but a socialist republican government which had inherited a legal system created by Tsar Alexander II's 1860s reforms. (The provisional government's last leader, Alexander Kerensky, was himself a lawyer who had defended political prisoners under the Tsar.) 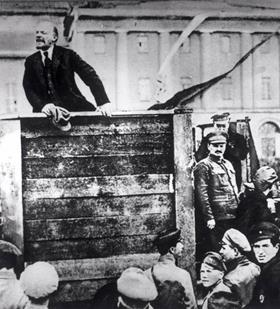 Concepts like 'not guilty' (unless you were a worker 'looting the looters') were early casualties of Lenin's regime, along with property, contract and business law. The Cheka secret police organisation was created within weeks of the Bolsheviks seizing power; admittedly functioning with an amateurism laughable in comparison to its successors.

Of course Lenin the jurist recognised that the dictatorship of the proletariat needed laws, and in 1921 introduced enough of a legal system to enable his 'new economic policy' to function. There was even an intellectual basis for the Soviet system: Evgeny Pashukanis published his seminal General Theory of Law and Marxism in 1924. Drawing on Marx, Pashukanis got one big thing right: that laws originated in the free exchanges of goods which form the basis of all civilisation. Alas the rules thus created are irredeemably bourgeois, and must wither away, along with the state, when the golden age arrives.

The trouble is, a system that treats laws as bourgeois hangovers or temporary expedients is one which can declared open season on anyone it deems to be an enemy, whether on the grounds of class, race or simply ideas. For every communist society must sooner or later tackle the question of what to do with those who don't fit in, be they mods, mullahs or morris dancers.

One fellow-travelling intellectual proposed a solution, enthusing about 'Extensive use of the lethal chamber.' In a communist society 'A great many people would have to be put our of existence simply because it wastes other people’s time to look after them.’ The intellectual's name was George Bernard Shaw.

Like many intellectual apologists for totalitarianism - and not just in the twentieth century - Shaw was writing under the freedoms and protections of a bourgeois system he affected to disdain. Pashukanis was not. By the late 1930s, his theories about the law withering away led to inevitable denunciation as a Trotskyite saboteur. He received his bullet in the neck 80 years ago this month. If he had a trial, it was held in secret.

The Soviet Union sometimes ruled by law, but its birth is nothing to celebrate by those who believe in the rule of law.