Setting the boundaries of judicial review

Why does the lord chief justice appear so relaxed about government plans to limit the scope of judicial review? Judging by his comments in parliament last month, Lord Burnett of Maldon (pictured) seems to support moves by ministers to shift the balance of power in their favour. 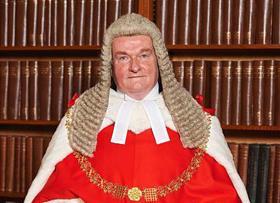 Our starting point must be the Conservatives’ election manifesto last year, which announced a ‘constitution, democracy and rights commission’ that would examine the relationship between the government, parliament and the courts and come up with ‘proposals to restore trust in our institutions’. The Conservatives promised to make sure that ‘judicial review is available to protect the rights of the individuals against an overbearing state, while ensuring that it is not abused to conduct politics by another means or to create needless delays’.

Many judges would regard that as an accurate description of how they currently handle challenges to public decision-making. But the lord chief justice insists that his colleagues have nothing to fear from a reassessment of judicial review.

He first made the point in oral evidence to the House of Lords constitution committee on 13 May. Lord Hennessy, the historian, asked him a broad question about constitutional reform, mentioning the government’s planned commission but not referring specifically to judicial review.

Why does Burnett appear to be siding with Sumption in saying the courts have gone too far?

In what could have been a reference to Gina Miller’s Brexit-related challenges in 2016 and 2019, Burnett said quite a few people had become ‘aerated’ about what had been going on over the past two or three years.

‘One wants to be very careful about people who are aerated,’ he continued, ‘but what we do need to recognise is that the business of judicial review has grown substantially in the course of my professional career.’ It was now ‘a completely different beast’ from what it had been when he was called to the bar in 1980, Burnett explained.

But judicial review was a ‘construct of the common law’, entirely judge-made. Everyone familiar with public law could identify one or two steps that it would have been better if the courts had not taken. Yet parliament had never intervened to regulate its substantive rules.

‘And so measured and scholarly debate about the boundaries of judicial review is something which, in my view, is proper when looking at constitutional arrangements,’ the chief justice said. ‘It’s not something which the judges or the lawyers, with respect, should be frightened of.’ Indeed, they should welcome it, he thought, provided the rule of law and the independence of the judiciary were respected.

Burnett stressed the importance of these twin principles in evidence to the Commons justice committee on 22 May. They were ‘irreducible non-negotiable features’, he said. His point, presumably, was that it must always be for the judges to interpret and apply any legislation limiting their powers.

In the Lords, he was asked by Lord Howell of Guildford what he made of Lord Sumption’s claims that the judges were expanding their empire and becoming more activist. ‘Lord Sumption undoubtedly identified a serious and significant direction of travel that the judiciary had been engaged in, in recent years,’ Burnett replied. Because the Human Rights Act could be used in so many areas of litigation, the courts were being propelled into making the sort of value judgments that were alien to the ordinary judicial review process.

Asked the same question in the Commons by John Howell MP, Burnett expressed concern that people were confusing judicial review, which was judge-made, with human rights challenges, where judges were required by parliament to take account of the developing jurisprudence of the Strasbourg court. Don’t blame us, he seemed to be saying.

Occasionally, Burnett added, he would be updated on the government’s thinking on its manifesto promises by Robert Buckland. ‘No doubt the lord chancellor will be in a position to say something before long, perhaps,’ Burnett said cautiously. Plans for a royal commission on the criminal justice process, another manifesto commitment, were ‘much less well developed’.

What are we to make of this? Clearly, there must be limits to judicial activism: assisted dying and transgender recognition were examples Burnett gave of contentious issues he thought best left to parliament. We can also see that Burnett may be less willing to allow judicial review than some of his colleagues. In the prorogation challenge last September, his court refused to interfere with what he regarded as an ‘inherently political’ decision by the prime minister. Less than two weeks later, Lady Hale’s Supreme Court found the issue justiciable, overturned his decision and granted judicial review.

But why does Burnett appear to be siding with Sumption in saying the courts have gone too far? Is this a subtle move to blunt the lord chancellor’s knife? Or is he trying to protect his judges from public opprobrium by pulling them back from the precipice? Watch this space.