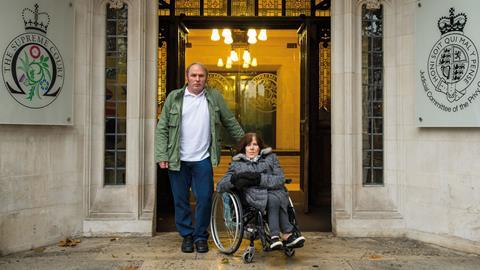 Public law challenges: What happened next

Seminal public law challenges disappear from the media radar after final judgment is handed down. What happens next is not always what one would expect

Seeing a key public law case brought and won is a reminder to many lawyers of the reason they committed themselves to the profession as a calling. Recourse to the courts allowed citizens to assert their rights, and the rights of those like them, against a secretary of state or a public body. Principles have been fairly tested and must be applied.

But what then? These decisions are made in politically controversial areas, against a backdrop of the patchy effectiveness of agencies, public servants and systems that are responding to practicalities and pressures – not least austerity. A perfect judgment is tested by the events that follow.

Here the Gazette recalls a selection of cases, and asks some of those involved: what happened next?

Mathieson v Secretary of State for Work and Pensions, 2015

Cameron Mathieson, a disabled child in receipt of Disability Living Allowance (DLA) was admitted to hospital in July 2010, and remained in hospital until August 2011 (he died in 2012). His father, Mr Mathieson, challenged the regulations governing DLA that mean that a child (aged under 16) stops receiving DLA after their 84th day of admission as an inpatient in an NHS hospital. The First Tier Tribunal, the Upper Tribunal and the Court of Appeal all dismissed his appeal. His further appeal was heard by the Supreme Court.

The court decided the secretary of state had failed to evaluate the impact of this policy on the children concerned. In particular, he had not considered the importance of parental participation in the care of a child in hospital. Withdrawal of the benefit in these circumstances breached article 14 of the European Convention on Human Rights (prohibition of discrimination).

What happened next? In this case the government moved to comply with the ruling. As Steve Broach, one of Mathieson’s barristers, relates: ‘Having fought us, and won, through the tribunal system and in the Court of Appeal, the government responded to the judgment by amending the regulations so that all disabled children keep getting DLA paid to their parents no matter how long they are in hospital.’

This appeal to the Upper Tribunal was related to child ‘L’ (C&C are the child’s parents). L has autism, anxiety and pathological demand avoidance. L had been excluded from a school. The school relied on Equality Act regulation 4(1)(c), which states that where there is ‘tendency to physical abuse’ their disability is not a protected characteristic under the act.

The National Autistic Society (NAS) and the secretary of state for education intervened when the case headed to the Upper Tribunal. Clifford Chance acted for NAS pro bono. The case was seen as significant by disability rights campaigners because of their conviction that many children’s behaviour deteriorated, sometimes to ‘physical abuse’, when their needs were not being met.

Such practice was not legal, the Upper Tribunal found. Schools must make adjustments for autistic children, or those with other disabilities, before they resort to exclusion. There was no appeal.

So what then? ‘Lots of families tell us schools are continuing to exclude autistic pupils for behaviour that is a direct result of their disability and their needs not being met,’ Jane Harris, NAS’s director of external affairs, tells the Gazette. ‘Many schools still don’t accept that this is their legal duty. The Department for Education… hasn’t taken any steps to make schools aware of their duties.’

A year on, NAS wrote to the secretary of state, urging him to clarify to all schools the implications of the ruling and their duty to make reasonable adjustments for disabled children. ‘We have still not received a response,’ Harris says.

RR v the Secretary of State for Work and Pensions, 2019

The so-called ‘bedroom tax’ regulations came into force in 2013. A controversial flagship policy of the coalition government, it introduced deductions from housing benefit for benefit claimants who have a ‘spare’ bedroom. In 2016, a Supreme Court ruling in a case brought by Jacqueline Carmichael (a disabled adult) found the ‘restriction’ of their housing subsidy to be unfair. The court decided six other cases. The parents of one disabled child also won, but five others lost.

What happened next was RR, which was constitutionally (and, for 150 people, personally) significant. The Upper Tribunal and Supreme Court decided that RR’s housing benefit should be recalculated without the 14% reduction, because the deduction would breach his rights under the Human Rights Act.

‘The client in this case was in an extremely unusual situation in that he was not set to gain anything financially should he win this case,’ Leigh Day solicitors Lucy Cadd and Carolin Ott, who acted for RR, recall. ‘His ultimate reward, however, was to know that approximately 150 people who had been waiting up to five years while his case was determined, will now have received, or retained, their full entitlement to housing benefit.’

The case had much wider significance, though, clarifying that public authority ‘decision-makers’ (such as local authorities or specialist tribunals) must not apply regulations that are incompatible with the Human Rights Act.

Ott and Cadd now observe: ‘We hope that, as a consequence, the government will think carefully about laying down regulations that contravene the HRA and could therefore be disapplied by decision-makers.’

R (on the application of Unison) v The Lord Chancellor, 2017

Employment tribunal fees were introduced in July 2013, starting at around £160 for a type A claim, such as wage claims, and £250 for a type B claim, covering issues such as unfair dismissal, race and sex discrimination. There was also a further hearing fee of £230 for type A and £950 for type B claims. Appeals at the employment appeal tribunal attracted additional £400 lodging and £1,200 hearing fees.

What followed was a steep decline in the number of cases going to employment tribunals. The government dismissed evidence that the fees were deterring people from enforcing their rights.

The public service union Unison decided to challenge in the courts the government’s decision to introduce fees. Over a four-year period, the union lost at each stage, until the case reached the Supreme Court.

The fees were set so high that they ‘had a deterrent effect upon discrimination claims, among others’, and also put off more genuine cases than the so-called vexatious claims the government claimed fees were meant to deter: ‘In English law, the right of access to the courts has long been recognised. The central idea is expressed in chapter 40 of the Magna Carta.’

It was a stunning and important victory, but that alone would not simply turn the clock back. How does the impact of that judgment look now?

Unison senior solicitor Shantha David, tells the Gazette: ‘Everything about conducting this litigation, especially at the start when the effect of ET fees was unknown, was risky. Since the resounding Supreme Court victory, ET claims have risen but they are still nowhere near pre-fees levels.’

She adds: ‘Heeding Lord Justice Reed’s plea to remove “impediments to the right of access to the courts”, the government has commenced recruiting judges. It would do well to implement the Law Commission’s recent proposals (for example, extension to time limits), given that the restrictions [imposed] by Covid-19 are likely to create strains on the system. More worrying is the government’s manifesto promise to dilute judicial review, with one of its apparent motivations to target judicial independence, a cornerstone of our democracy. Would cases such as ours be impossible to run in the future?’

R (on the application of Reilly & Another) v Secretary of State for Work and Pensions, 2013

This case concerned a challenge to the legality of the Department for Work and Pensions’ controversial back-to-work schemes, which require benefit claimants to undertake unpaid work in order to continue receiving payments. Among other grounds, the challenge relied upon article 4 of the ECHR, which prohibits slavery, servitude and forced labour.

Caitlin Reilly unwillingly undertook an unpaid work placement at Poundland under the sector-based work academy scheme. Once she agreed to enter the scheme, she faced losing her benefits if she did not complete the placement. Jamieson Wilson, a former heavy goods vehicle driver, was later joined to the case. Wilson was told that if he did not find work within the next three months he would have to participate in the Community Action Programme in order to continue receiving Jobseeker’s Allowance. Under this programme, he would be required to complete 30 hours a week of unpaid work. He refused and his benefits payments were stopped for six months as a result.

The Court of Appeal, overturning the High Court, quashed the 2011 regulations on which the schemes relied (upheld by the Supreme Court).

What happened next? Government moved fast to respond to the judgment. Not wanting to repay withheld payments, it repealed the 2011 regulations, replacing them with the Jobseeker’s Allowance (Schemes for Assisting Persons to Obtain Employment) Regulations 2013. The Jobseekers (Back to Work Schemes) Act 2013 was fast-tracked through parliament to retrospectively make sanctions against benefits claimants who opted out of a back-to-work scheme legal.

A further successful challenge followed. In 2014, the High Court declared that regulations under the Jobseekers (Back to Work Schemes) Act 2013 that sanctioned those who did not participate in unpaid ‘work for your benefit’ schemes by depriving them of an allowance violated the rule of law protected by the ECHR and the country’s unwritten constitution. (An appeal was heard by the Supreme Court, and dismissed.)

In 2016 the Court of Appeal joined Reilly with other cases and upheld the conclusion that the Jobseekers (Back to Work Schemes) Act 2013 was incompatible with article 6(1) of the ECHR, in that it had interfered with ongoing legal proceedings challenging benefits sanctions by retrospectively validating those sanctions.

The government decided to address this incompatibility by amending the 2013 act. Parliament’s Joint Committee on Human Rights reviewed its proposed remedial order in 2018, and judged that it ‘adequately remedies the incompatibility’ between the act and the ECHR. The government laid its response and a revised draft remedial order on 5 September 2019.