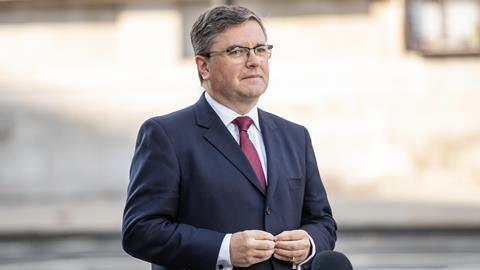 Lord chancellor Robert Buckland has broken his silence on the government’s threat to rewrite parts of the EU withdrawal agreement unilaterally – saying he will quit if he sees the rule of law being broken 'in a way that I find unacceptable'.

Appearing on the BBC’s Andrew Marr Show yesterday, Buckland was questioned extensively on the government’s admission that the Internal Market Bill will, in the words of Northern Ireland secretary Brandon Lewis, break international law in a 'very specific and limited way'.

Buckland said the bill was an 'insurance policy'. Marr highlighted article 27 of the Vienna Convention on the Law of Treaties 1969, signed by the UK, which states that 'a party may not invoke the provisions of its internal law as justification for its failure to perform a treaty'.

Buckland said: 'The interpretation I take on this is parliament is sovereign. It is free to pass laws in accordance with its own procedures. I’ve accepted the point that if we get to this stage there will be a conflict between our domestic law position and our international law position. It is the duty of the British government to seek to resolve that conflict as soon as possible. That is what I would expect the government to do. That is what we will do. We’ve been in this position before, when we’ve had incompatibilities with international law obligations. We’ve always sought to resolve them, and we have resolved them, and this will be absolutely no exception.'

On the potential reputational damage, Buckland said: 'Britain’s reputation around the world for rule of law and our leadership on international treaties is second to none… This is all about insurance planning. It’s a break-the-glass-in-emergency provision if we need it.'

Asked repeatedly if he would resign if international law is broken, Buckland said: 'If I see the rule of law being broken in a way that I find unacceptable then of course I will go. We are not at that stage.'

The UK Internal Market Bill is due to have its second reading in the House of Commons tonight. Those who will withhold their support for the bill include Sir Geoffrey Cox QC, who served as attorney general under Boris Johnson until February.

Writing in The Times today, Cox said: ‘When the Queen’s minister gives his word, on her behalf, it should be axiomatic that he will keep it, even if the consequences are unpalatable… No British minister should solemnly undertake to observe treaty obligations with his fingers crossed behind his back.’

Cox’s successor, Suella Braverman, reportedly told the Bar Council’s annual meeting on Saturday that there were tensions between domestic and international law, but that the bill would not breach human rights law.

The Solicitors Regulation Authority was asked on social media whether it will investigate any solicitor MPs who vote to approve the bill. An SRA spokesperson told the Gazette: 'We have confirmed that we consider any concerns raised with us on a case-by-case basis.'